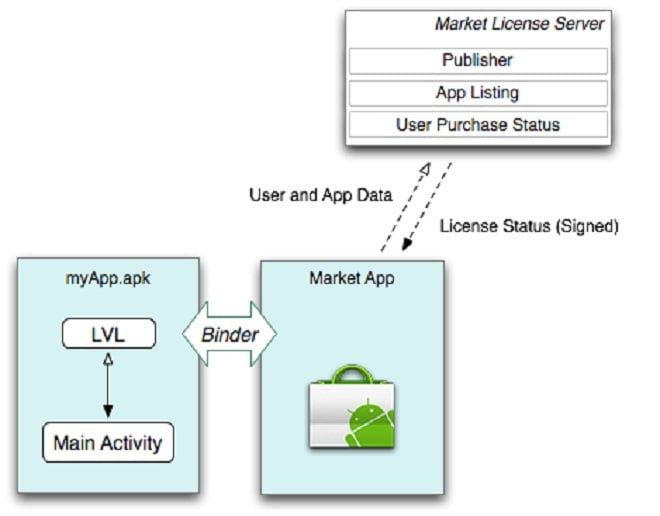 Google is trying to make Android a more lucrative platform for developers and it is implementing features which could make it more difficult to pirate Android apps – namely, the Android Market License Server should go a long way to thwart app pirates.

In its developer blog, the search giant said devs can now utilize a licensing service for Android apps.

This simple and free service provides a secure mechanism to manage access to all Android Market paid applications targeting Android 1.5 or higher. At run time, with the inclusion of a set of libraries provided by us, your application can query the Android Market licensing server to determine the license status of your users. It returns information on whether your users are authorized to use the app based on stored sales records.

This licensing service operating real time over the network provides more flexibility in choosing license-enforcement strategies, and a more secure approach in protecting your applications from unauthorized use, than copy protection.

The Market License Server basically gives the app developer a way to verify that the their app is running legitimately on an Android phone. Any app, presumably even pirated apps, will ping Google’s server to check that it is a valid copy.

Maybe it was the strong geek audience of Android’s early adopters who know their way around the Android Market and the Android app pirating scene, but Google’s mobile platform has yet to see the same amount of commercial app success as Apple’s App Store for the iPhone and iPod Touch. Many Android users are extremely comfortable rooting their devices and downloading pirated versions online. That comfort has gone a long way to prompting carriers like AT&T to bar side-loading apps.

Google knows that if it is going to win in the smartphone space it’s going to be because of third-party app developers. The cool thing about this new Android Market Licensing Server security feature is that it will give the app creator options for dealing with piracy – devs can choose to block pirated apps outright or switch users to a light version with a chance to legitimately purchase the program.

This is just the latest move Google has made to make things easier for Android app creators, as it plans to roll out more carrier billing options soon. This means Android app buyers on multiple carriers will be able to buy programs with just a few clicks and have it tacked on to their monthly bill.

This should be music to Android developers’ ears because every single barrier to app purchasing – even quickly inputting your credit card or Google Checkout information – is potentially a lost sale.

LG profits down thanks to its lame smartphones

LG Electronics saw its profits tumble for the second quarter thanks to poor performances by its TV and handset divisions....