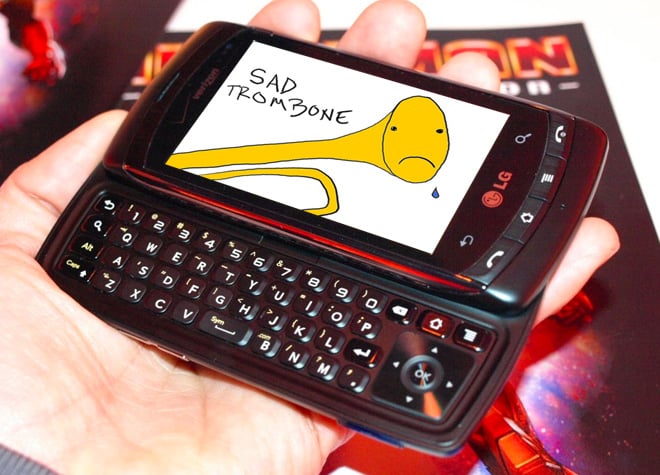 LG Electronics saw its profits tumble for the second quarter thanks to poor performances by its TV and handset divisions. It looks like smartphones like the LG Ally just aren’t going to cut it in a market filled with Android superphones the likes of the Samsung Galaxy S, Motorola Droid X, HTC EVO 4G and the Apple iPhone 4.

It was by no means an awful quarter, as the company reported a net profit of about $106.6 million but that was a drop of about 33% from the same period last year. For today, though, we’ll focus just on LG’s mobile division as we’re not IntoTVs or IntoLCDs.

The company is still the third-largest phone maker in the world behind Nokia and Samsung, as it shipped 30.6 million million phones for the quarter. But it’s increasingly becoming a smartphone world and LG is nowhere to be found in the high-end category dominated by Apple, HTC and Samsung. Do you really think the LG Ally belongs in our Superphone Shootout? Yeah, me neither.

Moving forward, LG will be making a big bet on the Android operating system, as the company plans to make at least 20 phones powered by that little green robot by the end of the year. Some of these devices will undoubtedly be mid-range phones like the Ally, but we’re looking forward to the LG Optimus because it looks like a chic smartphone that will launch with Android 2.2 (Froyo).

What’s important is that LG won’t be putting all of its eggs in the Android basket, as it is also a confirmed hardware partner for the upcoming Microsoft Windows Phone 7. The early LG handsets with Windows Phone 7 don’t look phenomenal but these are probably just prototypes or devices built for developers. And, with carriers like AT&T getting ready to push WP7 to its tens of millions of customers, LG could see its WP7 phones selling well in the near future.

I think LG has its best chance of making a dent in the U.S. smartphone market with Windows Phone 7 because there is no clear leader in this space. When it comes to Android, I think HTC and Motorola have it locked down with top-tier products like the Droid X and the EVO 4G. LG had better up its game with Microsoft WP7 though, as some of the hardware that will come from Dell looks mighty impressive.

Rumors that T-Mobile is getting ready to launch the MyTouch 3G HD as a high-end Android phone are starting to...