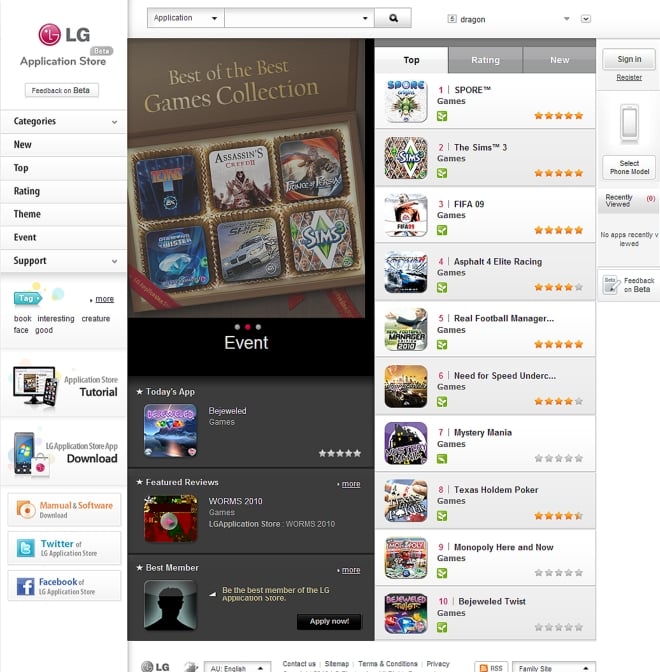 LG’s application store just launched and Thomas Ricker’s headline for Engadget sums up the news quite well: “LG’s Application Store launches in places you don’t live for devices you don’t care about”.

It’s for feature phones and smartphone, but surprisingly not Android phones, and support for Western Europe (UK, Germany, France, Italy, and Spain) isn’t even coming until next year. America … where’s that?

Full press release after the jump if you dare to read it. Make sure you’re on Riddilin though, because there’s no other way to parse this text.

WITH A NEW APPLICATIONS STORE, LG OPENS UP TO BOTH FEATURE PHONE AND SMARTPHONES

SEOUL, July 1, 2010 – LG Electronics (LG) today announced the opening of an all-new LG Application Store, with more than twice as many apps targeting users of both feature phones and smartphones in 33 countries.

Having comprehensively updated its Application Store, LG is now ready to offer customers a wide range of fun and useful apps including exciting games like The SIMS 3, Asphalt 4 and popular applications from SPB Series, for its mid- to high-end feature phones and smartphones. Android applications will be also available at LG’s store later this year.

“Today, more and more people want mobile devices that make their lives easier and more exciting through the right combination of applications. To meet this growing demand, we’ve put a great deal of effort into strengthening our application offerings for all types of phone owners,” said Dr. Skott Ahn, President and CEO of LG Electronics Mobile Communications Company. “By studying customer insights and collaborating with top-level companies, LG is working to produce some of the best applications on the market, and a truly singular mobile experience for our customers.”

Following the revamp, the LG Application Store will offer more than 3,000 applications from its cleanly designed, easy-to-use new site. Approximately half of the applications will be devoted to feature phones, a significant number in a market that has, to date, been overwhelmingly focused on smartphones.

According to research by Strategy Analytics, a market research company, over 90 percent of feature phone owners in the US and UK are interested in downloading and installing applications such as SNS (Social Networking Service), IM (Instant Messenger), VoIP (Voice over Internet Protocol), and navigation and mapping. Having taken the lead in mid- and high-end feature phones that are adopting many of the trappings of smartphones, LG, through its new, improved Application Store, is offering consumers more ways than ever to use their feature phones in creative and dynamic ways.

Along with a range of applications for Windows OS phones that are already on sale, the new LG Application Store will also extend its line-up of applications for Android-powered smartphones at the end of this year. With demand for Android-powered phones set to surge worldwide, the LG Application Store is well placed to enhance consumer’s mobile experience, offering greater value and genuine benefits to owners of LG’s Android smartphones.

It was almost two months ago when T-Mobile USA introduced a trio of LG phones -- dLite, GS-170 and Sentio...