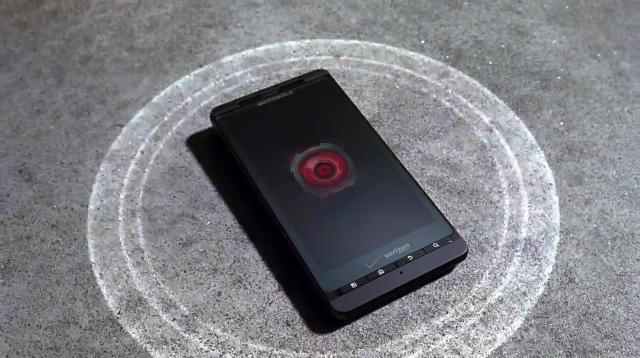 As with the last Droid X ad, the new ad is no where near as cinematic-ally shot as the teaser ads, but are still good in their own right. The new ad just shows a girl turning on the 3G Hotspot on her Droid X, and an orb-like something extends out of the phone, growing until in envelops a large space, which obviously gives internet access to the users within this orb “thingy.” The phone also pulses, further emitting the 3G signal to users.

I know it’s just an advertisement filled with computer-generated effects, but I wish the orb “feature” was an add-on from Verizon. I wouldn’t even mind if it didn’t even give me any 3G connectivity. A freakin’ orb comes out of it!

It’s not the best ad we’ve seen from Big Red, but the ads are continually captivating. We’re seeing 3G mobile hotspot features popping up on higher-end phones nowadays, but not even the EVO 4G has a dedicated TV ad for this unarguably useful feature.  Verizon’s hotspot option is also the cheapest you can find at any other carrier, coming in at just $20 extra dollars, compared to Sprint’s $30 charge for the EVO, not to mention that extra $10 charge for 4G, regardless of whether or not you’re actually in a Sprint 4G market. I’m not sure about what others are thinking about the two massive 4.3 inch super Android phones – the Verizon Motorola Droid X and the Sprint HTC EVO 4G – but the Droid X is the winner in my book. In terms of mobile hotspot capabilities, the Nexus One takes the cake by offering a free 3G mobile hotspot through Android 2.2 Froyo.

Get the T-Mobile Samsung Vibrant for $100 from Amazon

We've talked about how good the T-Mobile Samsung Vibrant (the T-Mobile variant of the Samsung Galaxy S) is, but now...