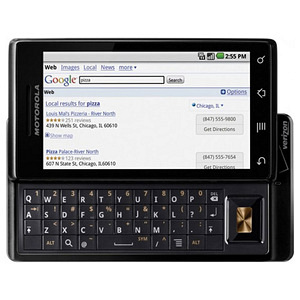 The beauty of having a device like the Motorola Droid is that it doesn’t have a custom user interface, which means that it should get Android updates much sooner than devices that are skinned with custom overlays like HTC’s Sense UI – like Android 2.2 Froyo updates. At least, in theory, that should be the case. So, if you’re a Droid owner watching your plain-vanilla-Android Nexus One counterparts enjoying Froyo, you must be getting impatient. Perhaps even more so after seeing the EVO 4G, which has Sense UI running over Android, gearing up for Android 2.2 next week. Fret not, because you’re going to get your soon – next week, in fact.

Now you’ll be able to enjoy all the features that Froyo has to offer on your keyboard-equipped Android handset. Flash 10.1 player will be at your behest along with improved JavaScript performance on the web browser, making your Internet browsing experience that much better. Additionally, you’ll be able to store apps on your microSD card as well. Overall, the update will likely make you feel like you’re rocking a totally new device.

Be sure to keep your eyes peeled for the update as Verizon starts to push it out next week, which is close enough to what we heard last month about Froyo going live on the Droid. Way to stay on track Verizon! You’re hustling to keep up with Sprint and the HTC EVO 4G.

Droid Incredible owners, we feel your pain, but given the news for the EVO and Droid, I can only say that it will be any day now. Same for you Droid X owners even though all three Droid devices were rumored to be getting the update next week, which conflicts with other reports saying the Droid X will be getting Froyo some time “late summer.”

Although this summer has been the summer of the super smartphones, it also seems to be the summer of Android. Let’s also not forget that, along with the aforementioned devices, the Motorola Droid 2 is also going to be launching quite soon with the latest version of Google’s mobile operating system. Rejoice!

Sprint already announced that the HTC EVO 4G is slated to get Android 2.2, or Froyo, starting August 3. Even...