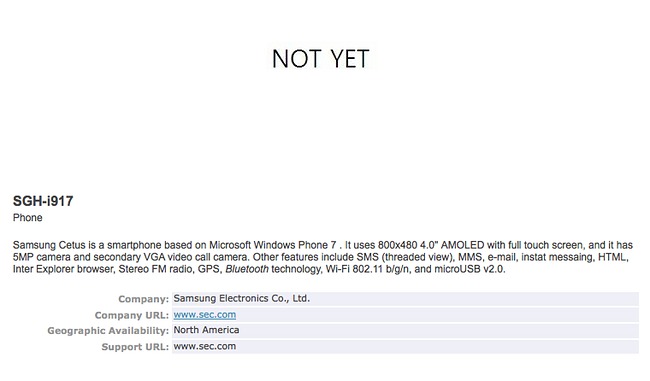 Samsung is all over this Windows Phone 7 game with its handsets already out in the wild to a select few developers and journalists. While we’ve all been reminded that what we’ve handled so far is pre-production hardware with pre-production versions of Windows Phone 7 software, which probably isn’t the greatest idea when introducing a totally new product, Samsung’s i917 handset has been outed as official. It’s the Samsung Cetus. That’s right, and I can only imagine that it rhymes with fetus, but that’s beside the point.

The name was exposed by the Bluetooth Special Interest Group, or Bluetooth SIG, in an online document also detailing specs of the phone. As you can see, it will be rocking a 4-inch, 800 x 480 AMOLED screen with a 5MP camera in back, and a VGA in front for video calling. Everything else listed seems to be run of the mill as far as smartphones go these days, but we’re still hoping the hardware and its components are on par, if not better, than the Galaxy S smartphones.

Assuming Windows Phone 7 as a platform lives up to its hype, or at least gets close, this could be huge for Samsung. After making somewhat of a comeback in the U.S. smartphone market with the Galaxy S series of devices–Captivate, Vibrant, Fascinate and Epic 4G–some rockin’ WP7 handsets would really cement its place here in the company of HTC, Motorola, Apple and RIM. And it would certainly give it a nice edge over its Korean counterpart, LG, who has failed to make waves after the Ally.