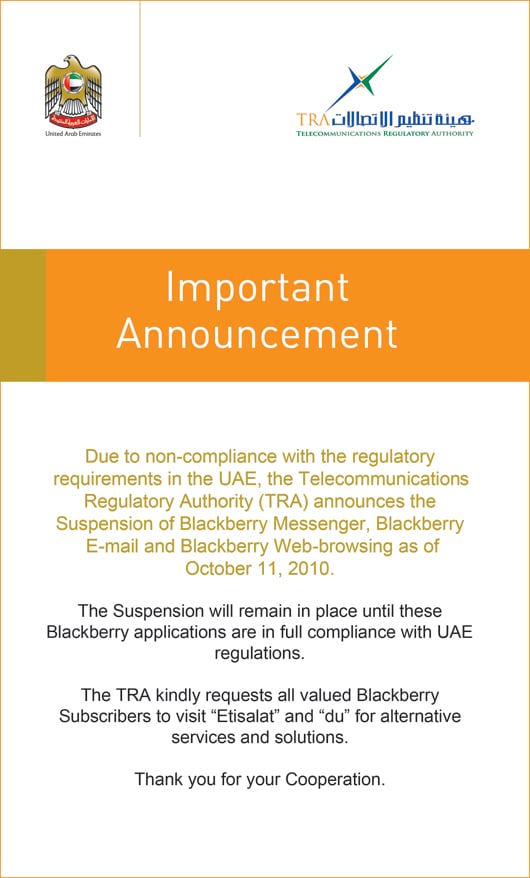 Last week there was talk about BlackBerry getting banned in the United Arab Emirates, as RIM’s data handling is proving too secure for governments. Since BlackBerry data gets sent to the servers in Waterloo, Ontario, Canada, government agencies have a hard time getting access to it, and as such people communicating through that channel can “act without any legal accountability, causing judicial, social and national-security concerns”, says the UAE’s Telecommunications Regulatory Authority. On that premise, BlackBerry data (including e-mail, browser, and BlackBerry Messenger) will be cut off in the region as of October 11. Customers at one of UAE’s two carriers, Etisalat and du, are advised to look at some alternate services.

This isn’t the first time RIM has hit similar roadblocks; India was on the brink of halting BlackBerry service a few years ago on similar grounds, but they’ve moved forward – Vodafone Essar just launched their BlackBerry service plans last month.  One of the proposed solutions was to make a Network Operations Center in India, which the government would be able to assert control over if the need arose, but RIM was adamant that they weren’t going to allow any e-mail snooping. I’m curious if RIM held their ground equally when getting further involved in China.

This isn’t a great situation for RIM to be in, especially if Saudi Arabia isn’t far behind. The governments have a point that criminals will default to BlackBerry for their ne’er-do-well scheming, but what’s RIM supposed to do – open the doors to their server rooms whenever a government says so?

I'm not sure whether to chalk this up to a false alarm, or if this is the real deal... but...