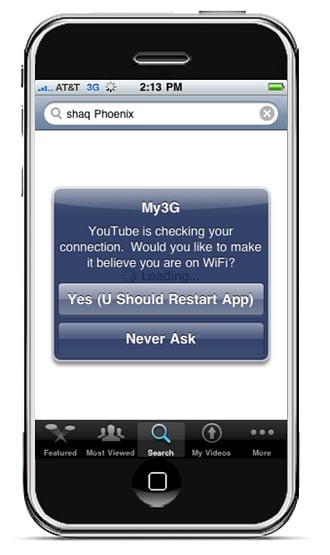 One of the coolest features on the iPhone 4 is undoubtedly FaceTime. Well, at least that’s the case if you have friends that want to chat with you, otherwise you have your buddies at Apple. Cool as this feature is, however, it is most certainly crippled by the fact that it only works over Wi-Fi. However, an app called My3G will change all that for you as long as your iPhone is jailbroken. Is it worth jailbreaking your iPhone 4?

According to My3G, this works because the app “makes Apps believe that they are on WiFi instead of 3G.” That means other apps and features that work only over Wi-Fi, like YouTube HD or FaceTime, will not work over the 3G network. Pretty brilliant feature for those of you who have limited Wi-Fi access. And the app will only cost you $3.99.

Certainly, Apple and AT&T can’t be too happy about this, but if you signed onto AT&T after purchasing the iPhone 4, you can’t be all that thrilled, either. That 2GB data cap will undoubtedly fill right up if you use these features, and unless you want to pay an additional $10 just for 1 extra gigabyte of data, be sure to use this application judiciously.

In case you were wondering just how much data you’ll be using up while chatting up friends on FaceTime over 3G, 9to5 Mac actually sorted it out and it turns out it’s about 3MB per minute. So, if you chat for about 5.5 hours, that’s approximately 1GB of data. On second thought, that’s not so bad after all. Who’s going to be talking for hours on end on FaceTime, anyway?

Here are additional features of My3G, in case you’re wondering what that $3.00 gets you:

– In-App popup request to enable/never ask for My3G to be enabled for that app
– In-App indicator when My3G changes the network from 3G to WiFi
– Ability to select which apps are My3G enabled and not.
– Default Apps – no configuration for the most popular apps!
– SBSettings Toggle! You can temporarily enable My3G for all apps or toggle back using your defined Apps list
– Dynamic enablement – Higher successs rate (near 100%) then 3G Unrestrictor (which does one off solutions for apps). My3G enables 3G indicators more dynamically.

Let us know how it works out for you if you decide to give this a go!

[Via: My3G and Redmond Pie]

While many consider the Apple iPhone and iPad consumption devices, these have quickly become cool content-creation devices but it's difficult...