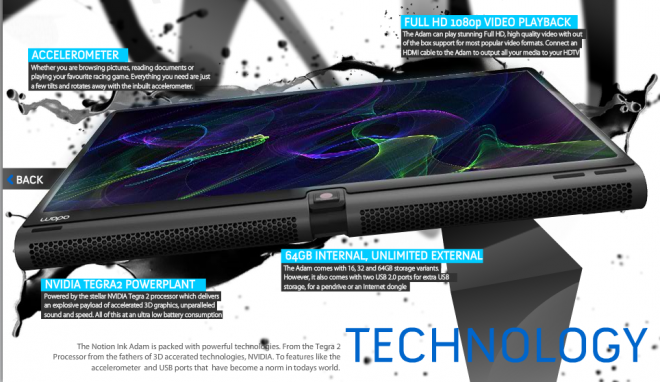 I definitely needed to hear this bit of news that The Adam tablet computer, from the Indian start-up Notion Ink, may be soon upon us. Maybe. The website has undergone a complete overhaul, and it looks like this bad boy may be rocking a SIM card slot and will be powered by the dual-core NVIDIA Tegra2 chip when in launches.

The Adam, in my opinion, will be the best tablet on earth, if it every gets real. It’s definitely a kitchen-sink tablet, with specs that would make even the best upcoming tablets squeamish. The Adam will come in different versions, one with 10.1-inch Pixel Qi LCD display with a resolution of 1024 x 600 that has a transmissive, transflective and reflective display modes. The other version will spot a non-Pixel Qi LCD display. The Adam also sports a 3.2 megapixel swivel camera, and a touch pad on the back if you didn’t want to use the touchscreen at all. Other specs on the Adam include a 1GHz dual-core Cortex A-9 chip that is part of the NVIDIA Tegra 2 system-on-chip (SoC) processing powerhouse.

There are other dual-core processor designs in the works at TI (Texas Instruments) and Qualcomm, but NVIDIA is the first chip maker to start shipping these ridiculously high-powered chips to device makers. We had a chance to play with Tegra2-powered tablets in the past, and there’s no doubt that NVIDIA’s graphics-processing roots and dual-core CPU designs are going to rock our socks when they officially make it to market.

The price ranges will likely vary dramatically, and the more expensive version could hit almost $800, if rumors are true.

Along with the updated website, a SIM card slot was added to the specs. The SIM is apparently not just for GSM data connectivity, but for voice calling as well. This may be very important for some users, and the option is a great thing to have, but honestly, I was sold on this tablet the second I laid eyes on the specs and before we had any hint of an integrated SIM card slot. The specifications have changed over time, but the core specs still remain, which is enough to make geeks swoon. There’s no solid release date, but we should definitely keep our eyes on it for a November launch.

I personally think that the perfect size for a tablet is 7 inches, but I’d have no problem with a 10.1 inch display if it means I get all the bells and whistles that the Adam comes with. I was really thinking about getting the Samsung Galaxy S Tab because its size and it’s price point will likely be more affordable than the Adam, but there’s just too much goodness that the Adam is promising to bring to the table to ignore (SIM card, Pixel Qi display, NVIDIA Tegra2, the list goes on and on). We’re not sure if these specs are finalized, but we should expect at least Android 2.2 pre-installed when this baby ships.

Below is a video of an Android tablet prototype powered by the NVIDIA Tegra2 SoC.

A new Android handset from Motorola has passed through the FCC and the Bluetooth Special Interest Group bearing the model...