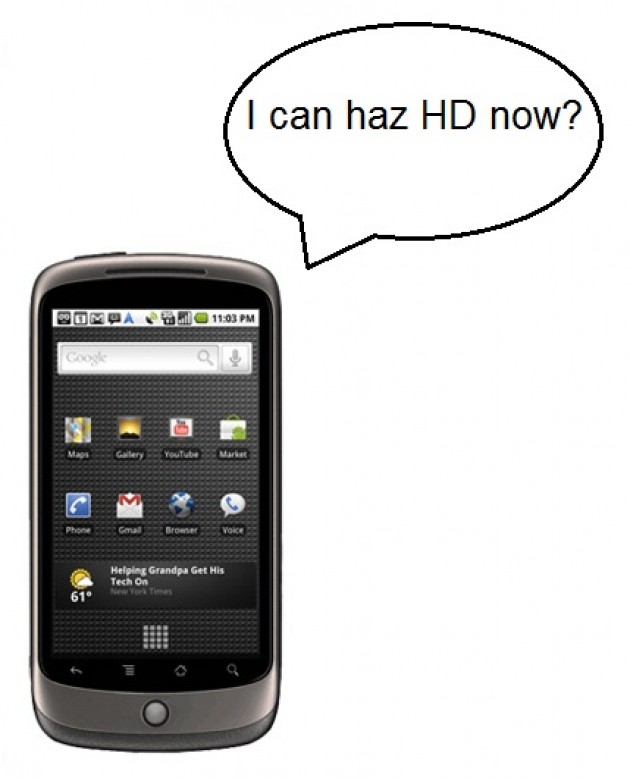 According to AndroidPolice, this mod for the Nexus One is only available for CyanogenMod builds that are greater than the current RC2, so you may need to wait a little while before it’s officially implemented into the next CM6 release candidate. The mod is available as a patch, and will likely be ported to other ROMs as time goes on, but for the time being, the 720p HD video recording patch is going to be a CyanogenMod exclusive. Now N1 owners no longer have to be so envious of the identical Sense-bearing cousin, the HTC Desire, which has been able to record in 720p for some time now.

From the video below, you can see how well the Nexus One record in HD resolution, even in less than perfect lighting conditions. The person shooting the demo also throws on his magnetic macro lens, and brings the smallest of objects with great clarity as you might expect. The microSD card was mentioned to be a class 4, so the class 2 SD card that comes with the N1 may not be the best to use with this mod. Overall, the mod works very well, and we’re patiently awaiting for it to be implemented into future builds.

Even with the newer smartphones coming out with all sorts of features build right in, the amazing Android developers have continued to enable functionality to the Nexus One that was just not available out of the box, and then some. It may not be available anymore, but the Google Phone is far from dead, and more impressive mods will surely be coming to it in the future.

Check out the video below to see how the Nexus One performs:

While the world focuses on the impending release of the Verizon Motorola DROID 2, Verizon Wireless and Samsung are quietly...