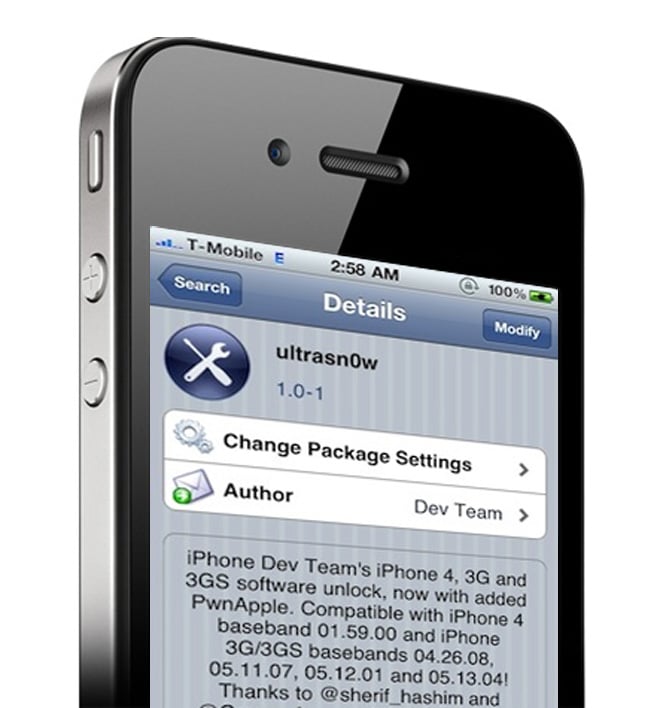 Did you jailbreak your iPhone 4 the other day through JailbreakMe.com and are now waiting to unlock your shiny new Apple phone from carrier lockdown? Well, today is your day – The Team has released their updated ultrasn0w unlock utility through the Cydia jailbreak app store, allowing any jailbroken iPhone 4 to be carrier unlocked.

Why would you want to unlock your iPhone using ultrasn0w? Well, first of all, there’s the whole “stick it to the man” appeal of freeing your handset from being locked to a single GSM carrier (AT&T in the US). Secondly, you can use an unlocked iPhone 4 darn near anywhere in the world by popping in a local carrier’s SIM card and booting up the handset. That’s the kind of freedom this country was built upon, but has unfortunately been reeled in by the likes of Apple and AT&T. Even if you’re not a globe-trotter, it’s just nice to know that you have to option to unlock the iPhour and use it in any way you see fit.

Now, before you can unlock your iPhone 4, you’ll have to jailbreak the device. To do that, simply go to JailbreakMe.com on your phone, as we describe here.

Then, you’ll fire up Cydia (it’s automatically installed by JailbreakMe.com) and search for “ultrasn0w” – keep in mind that ultrasn0w is spelled with the number zero. Install the ultrasn0w app and let it do it’s thing. In less than two shakes of a Jobs’ tail, you will have a carrier unlocked iPhone 4 that’s free to connect to any GSM wireless network in the world. Have fun!

Google wants to make it easier for you to search on your phone and it is bringing its search History...