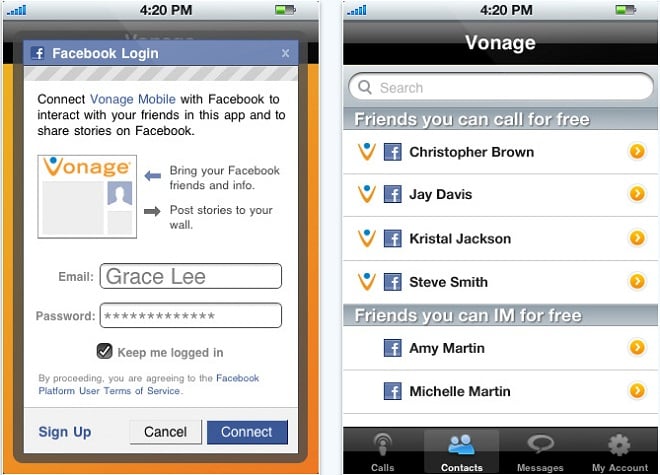 Vonage is trying to make it easier to speak with your Facebook friends on the go and its new iPhone and Android app enables free VoIP calling to your contacts on the world’s largest social network.

This isn’t the company’s first mobile VoIP app, but the Vonage Mobile for Facebook app focuses on connecting you with your social networking friends. I downloaded the Android app on the Motorola Droid X, pumped in my Facebook info and a list of my friends pops up.

With the Vonage Mobile for Facebook app on Apple iPhone and Google Android, you’ll be able to instant message your friends and make voice calls over WiFi or 3G if that user also has the app. I tested it out with a friend and it sounded pretty solid but be wary if you’re using the Apple iPhone version because those 3G calls will still count against your monthly data limit.

“The Vonage Mobile app for Facebook is a tangible example of our commitment to deliver extraordinary value and a better communications experience for individuals and their social networks, across broadband-enabled devices, around the world,” said Marc Lefar, Chief Executive Officer of Vonage, in a prepared statement. “This is just the start. In the future we will expand on this service to include a wide range of integrated voice and messaging services that change the way people communicate.”

It’s a cool little app but it’s interesting that the VoIP-calling company would make a program with a heavy emphasis on Facebook. This is just another sign that the social network is quickly becoming a force in the mobile world.

Facebook really wants to become a platform on mobile phones and programs like Vonage’s will only help that goal. We’ve also seen apps from Loopt which take strong advantage of the world’s largest social network to implement an additional layer of connectivity.