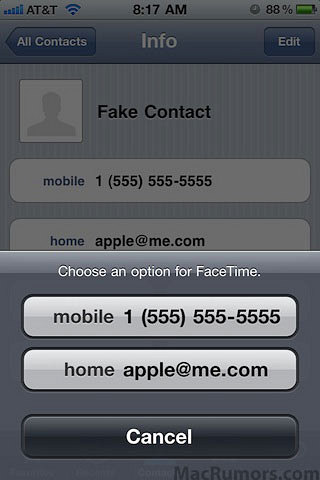 The latest iOS 4 beta 3 has revealed that FaceTime will now be available via e-mail instead of just within phone calls or from a contact’s phone number within the contacts list. As you can see in the image above, an e-mail option pops up along with the phone number option in the Contacts application to initiate FaceTime calls. This could mean that FaceTime might becoming to future iOS devices that are equipped with a front-facing camera. A new iPod touch or iPad, perhaps?

Now if only Apple would allow FaceTime calls over 3G without having us jailbreak our devices and download third-party apps, this would be even better.

We've been looking for the folks at either Apple or Nokia to bring true haptic feedback technologies to devices like...