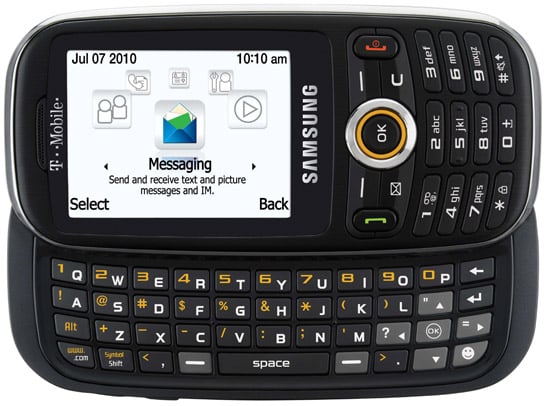 T-Mobile has a new device in its prepaid offering – Samsung T369. The device which is made for heavy texters, who at the same time don’t want to pay too much for a smartphone nor to commit to a two-year contract, rocks a full side-sliding QWERTY keyboard, 1.3-megapixel camera, Bluetooth connectivity, some media player, speakerphone and a microSD memory card slot. It’s not a 3G phone, and interested buyers will have to settle with EDGE speeds.

The Deutsche Telekom-owned operator asks $80 for the T369 and that’s the price without any contracts signed. That sounds like the right price for such a phone and I’ve no doubts they’ll move quite a few units in due course.

In addition to texting, Samsung’s low-end baby also comes with an email client, and I guess some instant messaging and social networking apps. Finally, for those who need a web browser, there’s the good ol’ Opera Mini, which provides full Internet experience for feature phones such as the T369…

What do you know - Apple iPhone won't be the only cool white kid in the (smartphone) block. We've already...