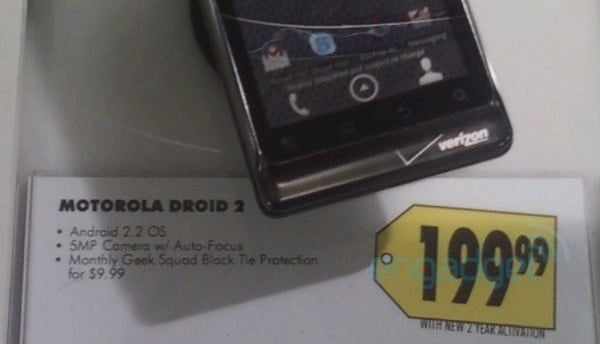 It’s been an incrementally painful journey for those of you waiting for the Motorola Droid 2, and it’s largely thanks to Best Buy leaks. First, there were the pictured cases online which revealed the fact that the mega-retailer would be carrying the Verizon smartphone. No surprises there. Then cases actually started arriving, which signaled the imminent arrival of the Droid 2. Before we had any time to breathe, Best Buy employees were showing off dummy phones for display. And now, we have full pricing details for Best Buy.

It shouldn’t really shock anyone that this thing is pegged at $199.99 with a new, two-year contract — just like the Droid X before it. Of course, if you’re looking to grab one sans contract, these sorts of deals are known to get notoriously high. In the Motorola Droid 2’s case, it’s $599 for the price of freedom.

There aren’t any solid launch dates yet, though the rumor is set for August 12. If so, it doesn’t seem like there would be much time for a massive pre-sale like we saw with the Droid X or HTC EVO 4G. Stay frosty and vigilant; if you miss out on the launch there might be a good chance you’ll be stuck waiting like most Droid X owners since the device was sold out almost everywhere on launch day.

Another rumor strongly suggests that Apple and Verizon Wireless are gearing up to launch a CDMA version of the iPhone...