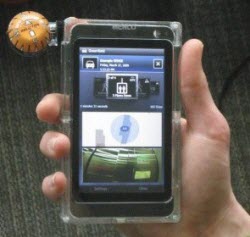 Microsoft Research made public several new research papers that shed some light on a project with the codename of Menlo. This top secret project was rumored to be an attempt by Microsoft to develop a novel operating system for mobile devices and these newly published documents confirm this assumption, in part. According to the publicly available documents, Menlo is:

As part of this project, Microsoft is apparently still looking at Windows CE for the core framework of this alternative mobile OS. Despite the ho-hum nature of Windows CE, this framework will still be forward-looking with support for third-party applications. Overlaying this Windows CE-based platform is at least one new Silverlight application, known as Greenfield, a breadcrumb utility that uses the array of sensors included in the Menlo device for tracking and navigation.

Less exciting than a hot, new platform that takes the best of the failed Kin and merges it with Windows Phone 7, Menlo may be targeted for future embedded devices which typically run a flavor of Windows CE. The Menlo device might very well be our first glimpse at what Microsoft sees as the future of commercial enterprise embedded devices. We could easily see delivery persons or inventory personnel using a next generation scanner that leverages the navigation capabilities and on-board sensors of this prototype mobile device. Menlo may also be an attempt by Microsoft to develop a mobile OS that is not necessarily cutting edge, but is compatible with a wide variety of underlying hardware and processors.

Any other suggestions or theories as to the future of and target devices for this mobile platform? We’d love to hear your thoughts and/or predictions in the comments section below!

Google and Verizon held a press conference today to address concerns that it is conspiring to undermine net neutrality. Google...