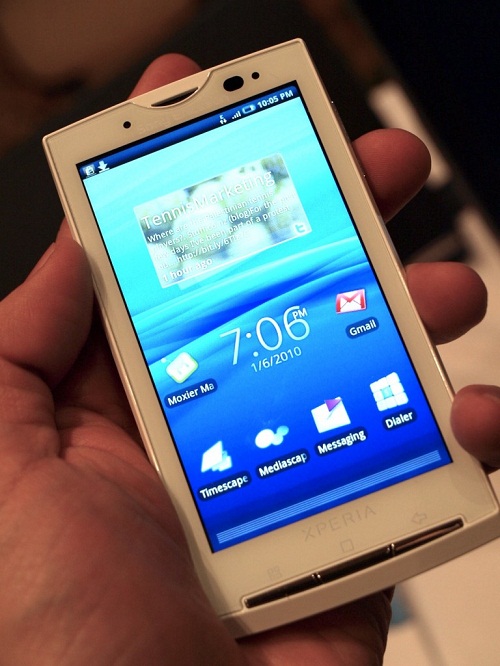 Search within the depths of your memory if the Sony Ericsson Xperia X10 doesn’t ring a bell because it’s soon coming to AT&T. Remember that handset now? The one Sony Ericsson unveiled in November of last year? The handset that is virtually ancient compared to the Samsung Captivate and iPhone 4 on the same carrier? Yes, that’s the one–and instead of being in the sub-one-hundred dollar range like the iPhone 3GS, it’s coming in at $149.99 with a two year contract.

The Xperia X10 features a large, 4-inch touchscreen and a 1GHz Snapdragon processor all bundled up with Android 1.6. Had it been released shortly after the time it was announced, this thing could have been one of the better super phones at the time. Unfortunately, for one reason or another, Sony Ericsson waited this long and it was quickly overshadowed by the Nexus One, Droid Incredible, HTC EVO 4G, iPhone 4 and Droid X.

But if you’re into shelling out a good chunk of change for a handset that seems like it’s DOA, and you’re a fan of UX with Mediascape and Timescape, perhaps this is the handset for you. Of course, you’ll also have to consider the Android apps and features that won’t be working on this device due to its software version. Hopefully Sony Ericsson and AT&T will fix that later and give this thing 2.1 or 2.2 in the near future.

The Xperia™ X10 comes fully loaded with a 4-inch crystal clear touch display, superfast 1GHz Snapdragon processor and a GPS. The smartphone also features an 8.1 megapixel camera with smile detection, face recognition, autofocus and LED flash. The device comes with 8 GB of on-board memory and a 2 GB in-box memory card, with expandable memory up to 32 GB.

Sony Ericsson’s custom user experience is great for the intersection of communications and entertainment. Two signature applications, Mediascape and Timescape™, build on the Android platform to enhance the experience for users.

Mediascape on the Xperia ™ X10 gathers music, photos, videos and content from your phone’s memory card and online, letting you browse, search, listen and share your media from one unified view. For example, view photos taken on the device as well as your Facebook® and Picasa™ web albums. Or, when listening to a favorite song on your phone, press Sony Ericsson’s infinite button to access related content about the artist pulled from the phone’s memory as well as albums, songs and video content from YouTube™ and search results from Google.
Timescape™ is a unique communication application that automatically organizes social interactions in chronological order, leaving users free to concentrate on keeping in touch on-the-go. From Facebook® and Twitter® updates to photos, emails and text messages, a scrolling menu offers easy viewing and organization of all communications. Additionally, tap the Timescape™ infinite button to bring up and view all communications from a single person in a single place.
“Sony Ericsson has created a unique choice for our smartphone customers looking for a fun and smart device,” said Michael Woodward, vice president, Mobile Phone Portfolio, AT&T Mobility and Consumer Markets.

“Sony Ericsson is raising the bar for entertainment-rich phones with the launch of the Xperia ™ X10,” said Paul Hamnett, senior vice president, Sony Ericsson North America. “With the convergence of our user experience platform and the Android OS, we are bringing consumers a smartphone experience that is not only exciting, but also very refined. Following the successful global launch of the Xperia™ X10, we are pleased to partner with AT&T to launch this phone in the U.S. market.”

The Sony Ericsson Xperia™ X10 smartphone will be available in black at AT&T stores, authorized retailers and www.wireless.att.com on August 15 for $149.99 after a two-year service agreement and minimum smartphone data plan.

Ever hear of CitySourced? No? Well, we received a note from the good developers over there just a little while...