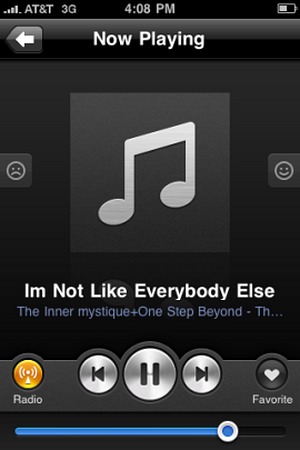 Music lovers, get excited. Grooveshark has finally arrived for the iPhone–and you don’t have to jailbreak your smartphone, either. While we’ve seen early test versions for the Apple smartphone, it has taken what seems like forever to become official through the iTunes app store. Now you can find all the songs you’ve been struggling to find anywhere else and stream it through your iPhone. The app is free and it comes with a 30-day free trial, and after that you’ll have to sign up for a VIP account to continue using the service.

With all those tunes on tap, you’d think the legal ramifications would pretty much render this app obsolete, but according to CNet:

The app is dated August 5, but Grooveshark began publicizing it on Wednesday, following the company’s legal settlement with Merlin, which handles digital distribution for small labels such as Beggars Group and Rough Trade. Grooveshark has previously settled a lawsuit with EMI, but it still faces one from Universal Music.

Universal Music is a pretty big one, but if it managed to settle with giant EMI perhaps it will fare well with what’s up ahead, too.

So just how does all of this work, exactly? CNet has spoken with Grooveshark in the past, and it turns out that content is user uploaded. After that point, the company gets in touch with the necessary parties in order to get the legal part of streaming the music cleared:

In my past conversations with Grooveshark, the company has claimed that users post all content to the site, after which it tries to work out any necessary licensing deals with content owners. This has never seemed like a legally airtight strategy to me, but the company has managed to survive for several years and release regular updates and improvements, so it’s not like it’s sitting around waiting for the axe to fall. Neither should you–if you have an iPhone and love music, there’s no better way to see the power of a subscription service.

Whatever they’re doing, I’m just glad it’s working. Now you can enjoy most if not all of the songs you could possibly want on-demand on your iPhone.