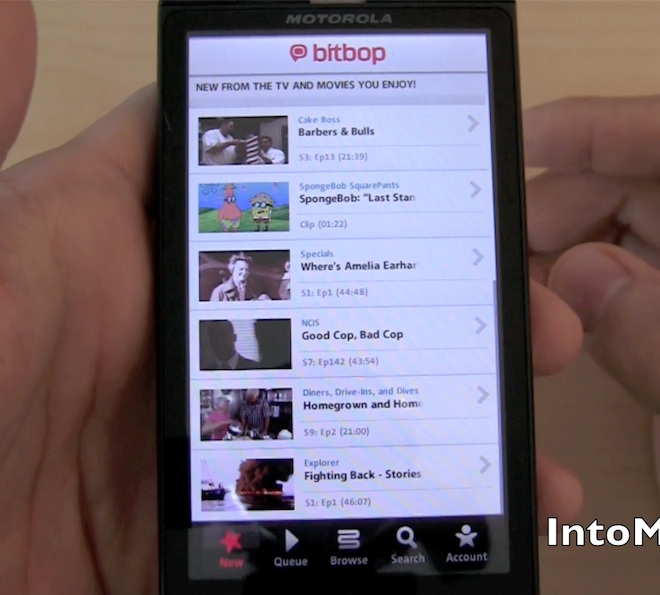 While streaming music apps like MOG and GrooveShark continue to soak up the lion’s share of attention in the streaming media space, apps like BitBop are gaining traction for their ability to stream video (TV and movies) over 3G and WiFi networks. BitBop for Android is still strictly in beta and not yet available for general consumption, but we managed to get our hands on the unreleased Android app and took it for a test drive on 1080p HD-quality video.

The idea for BitBop is simple. You have a smartphone with an unlimited data connection, or access to WiFi, and you’ve got some time to kill. Assuming you don’t want to waste said idle-time actually, you know, being productive, you’ll probably want to entertain yourself with as little cerebral engagement as possible. That’s where watching a TV show or movie comes in – and that’s where BitBop shines. The app, brought to us by the Fox Mobile team, basically allows you to stream video content directly to your handset over a 3G data or WiFi connection. You can also download the content to a memory card for viewing at a later time (like on a plane).

The beauty of BitBop is that it can actually stream the videos to you over a cellular data connection. For instance, if you’re waiting for your plane to board, you can just hop onto BitBop and knock down half an hour, or so, with a quick jaunt into the land of American Dad or Parks and Recreation. The app automatically detects your connection speed and optimizes the video resolution to deliver the best compromise between picture quality and load times. Or, if you want, you can download and watch the video in the highest resolution that BitBop allows.

And, if you get interrupted mid-show, you can simply fire up the BitBop app again and pick up your TV show or movie where you left off. It’s all automatic and fairly simple. You can even “Follow” your favorite shows in order to have them automatically added to your “Queue”. The only quirk is that you have to add shows to you Queue before you’re allowed to watch it.

The app is still in beta, so there weren’t any movies to test. But, in our tests over WiFi and 3G, the app performed admirably