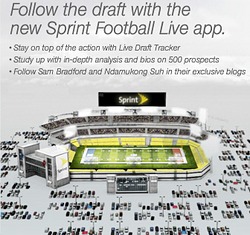 Sprint football fans must have had their hearts crushed when opening NFL Mobile one day only to find that it had been replaced by something less cool–Sprint Football Live. That’s right, all professional football games were stripped from those fans when Verizon announced its deal with the NFL. Now you can still get live updates on games, but that’s like sitting around and listening to games broadcast over the radio. College games can still be viewed live, but you’re relegated to not much more when it comes to pro games.

Although it’s been available since the day after the Verizon/NFL deal, Sprint is now formally announcing it. You’ll be able to watch college games live, get updates as they happen for professional NFL games and a whole lot more. Sure, it’s a little more watered down than the official app Sprint used to have, but what can you do? Check out the press release below!

OVERLAND PARK, Kan.–(BUSINESS WIRE)–Whether you’re standing on the sidelines at your child’s weekend afternoon soccer game or need to keep up with your fantasy team while sitting in the stadium watching your favorite team, with Sprint Football Live it’s no problem. Football fans can follow their favorite college and pro football teams, manage their fantasy drafts, and keep up with fantasy updates with the new Sprint Football Live app. Unlike some other wireless carriers, which charge extra for data and up to $10 a month additional for video, the new Sprint Football Live app and all content is free to Sprint (NYSE: S) customers with an Everything Data plan. With Sprint’s 4G network, fans will experience live game viewing similar to what they see on a TV – without the lag.

Sprint Football Live is a comprehensive mobile football application across both pro and college football including:

“College and pro football fans have an insatiable appetite for instant information,” said Steve Gaffney, vice president of Corporate Marketing for Sprint. “The Sprint Football Live app is a one-stop location where fans can easily keep up with the latest news, scores and fantasy information from their phone. We’ve made it easy to use and it’s included with our data plans. With Sprint 4G, watching live football games on a phone is unparalleled by any other national carrier.”

Sprint is the first national wireless carrier to launch wireless 4G technology in cities across the country. Sprint boasts 48 metropolitan areas that are enabled with Sprint 4G, which allows for Internet traffic at super-fast speeds.

Sprint Football Live is available on most Sprint handsets, and all Sprint video-enabled phones that offer Sprint TV. Both are included at no additional charge with Sprint Everything Data plans, which include Any Mobile, Anytime for unlimited calling to any mobile phone in America, unlimited text, unlimited Web and unlimited GPS navigation starting at $69.99 – the same price AT&T and Verizon charge for unlimited talk only.

More information is available at www.Sprint.com/football.

UberTwitter is one of the few Twitter clients for BlackBerry that can give the official app a run for its...