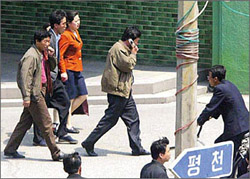 More and more North Koreans are getting in the mobile world and now there’s about 185,000 mobile phone users in the communist country. More precisely, as of June 30th, 184,531 subscribers had mobile access following a recent government expansion of services to several cities other than Pyongyang.

Technically speaking, 60% of the population are covered with the mobile signal, but the network reportedly excludes cities near the border with South Korea due to authorities’ fear the proximity could allow cross-border communication.

For the record, there were about 60,000 mobile phone subscribers in March of this year.

My two cents: it’s good to see mobile technology getting some traction even in such closed places as North Korea. Hopefully, the government and Orascom Telecom which manages the network will continue with the expansion, allowing more citizens to take part in the modern world…

If you listen to Apple tell it, Adobe has been "lazy" about its mobile Flash strategy and that's why the...