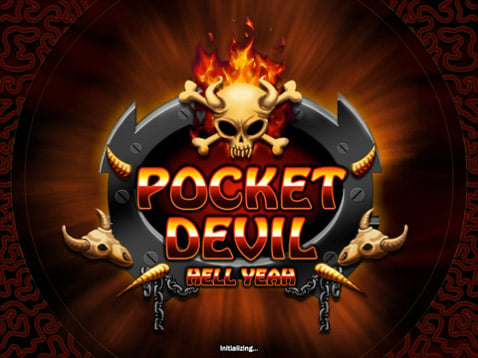 Pocket Devil just got its iPad version called Pocket Devil HD – Hell Yeah!, which is not only optimized for the bigger screen of Apple’s tablet, but also much better, packing a more torture methods and larger assortment of weaponry. Here’s the official pitch (from the press release):

Upon entering Pocket Devil HD – Hell Yeah!’s hellish underworld, up to five tiny devils can be summoned with a tap. When The Mugat2 are not being eaten by the murderous plant who feeds on their blood, players are encouraged to do their barbarous worst. Weapons range from cans of napalm, falling spikes and pitchforks, to torturous instruments of terror including a guillotine, an electric chair and a chained noose. There is even a sexy She-Devil that kills every one of her demonic admirers with a single kiss of death which turns them into crumbling stone.

In addition to the “standard gameplay,” there are also few mini-games included. One such game is “Mugat2 Slapfest”, which is a whack-a-mole inspired game that has the user backhand as many minions as possible in sixty seconds. The other mini game is called “Mugat2 Halfpipe Skateboarding” in which you try to pull off as many gnarly tricks as possible to score points.

All in all, expect tons of fun from Pocket Devil HD. AppStore link is below…

Manufacturer of insulated beverage bottles Thermos is joining a number of other companies that use iPhone app as a marketing...