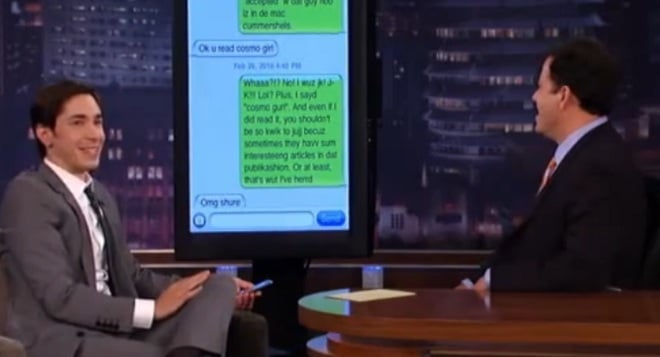 Oh no. Justin Long, the star of the “I’m a Mac” Apple ads, apparently sports a jailbroken Apple iPhone 4. I’m sure Steve Jobs isn’t happy about that.

On the Jimmy Kimmel show, Justin Long showed off his Apple iPhone 4 to show off a funny text message exchange. He hooked it up to an external monitor and at the 7:04 mark of the video below you can clearly see the Cydia icon. We all know that Cydia equals jailbroken, right?

Engadget suggests this could have been done by the show’s producers because there’s also a TVOutTuner icon right next to the Cydia app. Unless you’re Steve Jobs at a keynote, you cannot easily do TV-out with an Apple iPhone without it being jailbroken.

So, how did they do it? There’s a chance that Justin Long went to the web-based site for jailbreaking, but he should be concerned because that could open up a security flaw when viewing PDF files. There are patches out there but we all know Mac users don’t ever, ever, ever have to worry about viruses and exploits, so I doubt Justin Long has patched his Apple iPhone 4.

Apple has steadily reduced the need for having jailbroken phones, as the iOS 4 operating system finally gives users multitasking or, at least, a form of background processing. This was one of the most sought-after reasons users would want a jailbroken Apple iPhone.

Another reason people may want to jailbreak their phones is to get access to programs from outside the App Store like a tethering program. With these apps, you’ll be able to use your iPhone as a modem without having to pay the extra $20 a month to AT&T.

It’s not all roses though, as a jailbroken Apple iPhone can open you up to vulnerabilities and you are violating your warranty when you do it. This is now a fully legal process but there are still risks associated with it. Jailbreaker beware!