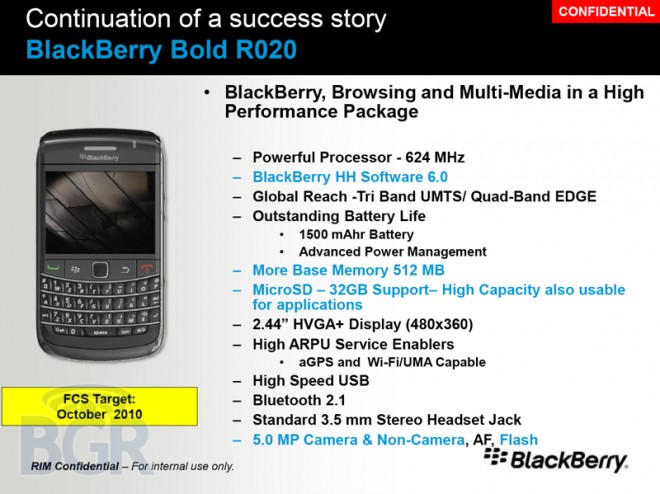 Yet another leaked slide has confirmed suspicions of an updated version of the classic BlackBerry Bold 9700 that will include 512 MB of RAM, a 5 megapixel camera, and OS 6. The 624 MHz processor, 1500 mAh battery, 2.44″ QVGA display, aGPS, Wi-Fi, and world-roaming HSPA are all the same as the original. Since the 9700 is getting BlackBerry 6 as well, this probably won’t be too attractive to anyone with the latest Bold, but for those with anything older who just can’t get behind the form factor of the Torch 9800, this model will be a nice option. It’s listed as having a model number R020, which is a little weird; it’s more than likely the 9780 that we’ve seen making the rounds already.

The new Bold is probably coming to AT&T this October, if this slide can be trusted.

Details of RIM's rumoured BlackBerry tablet have been scarce, especially what kind of software it will be running. We presumed...