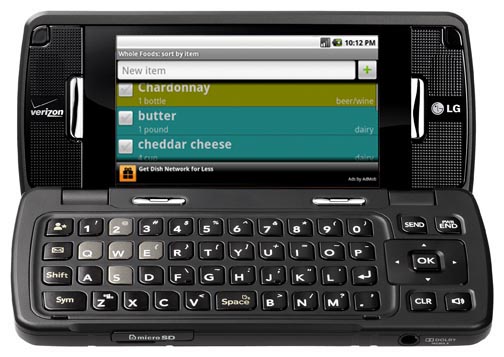 According to leaked information, LG’s enV series of handsets may shed its feature phone roots and adopt Android as its underlying OS. Those familiar with Verizon Wireless will associate the LG enV brand with a series of messaging-centric feature phones that extend all the way back to the original “The V”. One of the more recent versions to hit Verizon is the enV Touch, which offers a clamshell design and a QWERTY keyboard that is just dandy for texting in 170 characters or less.

The Verizon enV Touch 2 will reportedly offer many of the features of the original Touch including the clamshell design, the QWERTY keyboard, and both an internal and external screen. The enV Touch 2 is reportedly a tad on the big and heavy size but that characteristic usually goes hand in hand with a clamshell design. Folks who have gotten their mitts on the bulky Verizon LG Voyager would concur.

While the Touch and its rumored successor may share some similar features, the Touch 2 is rumored to be a world phone running Android 2.1, though Froyo could make its way to the handset before launch. The enV Touch 2 is expected to launch with Verizon in time for the holidays and is presumably one of the ten Android handsets from LG on tap for the end of 2010.

While some may turn up their noses at an Android-packing enV Touch, we must admit that we are intrigued by this feature phone turned smartphone offering, anyone else share our interest?

We've got bad news for all you Android fans looking to pick up a Motorola Droid X from Verizon -...