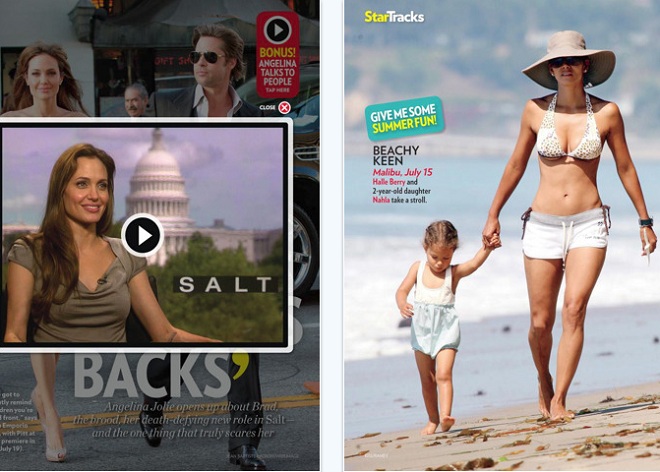 Sometimes, it can be difficult to keep up with the Kardashians on your Apple iPad but you’re luck because People Magazine is releasing an app for that “magical” tablet.

The People Magazine Apple iPad app gives you all the celebrity dirt you’d expect from the print version but there is also some extra content that makes use of the tablet’s capabilities. There will be extra photos and in-line videos, as well as exclusive content for the Apple iPad.

One of the neat things about the People Magazine Apple iPad app (other than multiple photos of Angelina Jolie) is that those who subscribe to the print version get free access to the digital version. If you don’t subscribe, you can buy the Apple iPad app for $3.99 per issue.

The New York Times talked about the difficulties of allowing this type of subscription to work:

The arrangement did not come easily. Time Inc., publisher of Sports Illustrated, and Apple wrangled for months over whether Time could provide its print subscribers with a mechanism to download magazine apps for the iPad without having to pay.

But Apple, which takes a cut of the total cost of app downloads, has now agreed to make it possible for People subscribers to enter a verification code into its iPad app store and receive the app free.

People Magazine is not the only magazine looking at the Apple iPad as a potential savior, as other publications like Wired and Time have also released apps for the tablet. Some publications were upset that Apple didn’t implement a standard magazine format like it did with iBooks, so the various magazine apps can have different user interfaces and layouts.

Sometime-Apple-rival Adobe has actually introduced a digital magazine format which will look good on the Apple iPad, as well as the slew of tablets that should hit the market over the next couple months.

Facebook Places should get boost from Hot Potato buy

In a move that's not unexpected, Hot Potato has been acquired by the world's largest social network and this move...