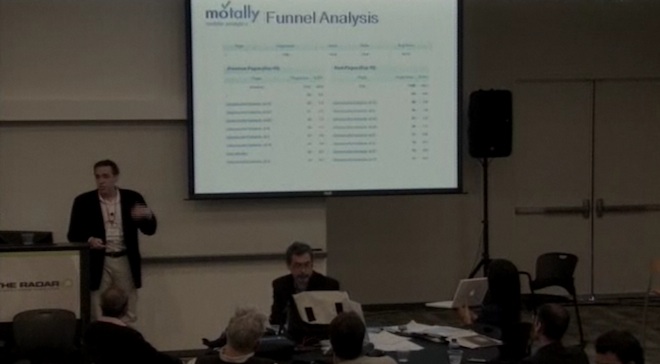 Nokia has just announced that they’ve acquired mobile analytics firm Motally, which currently has only 8 employees. Financial details have not been disclosed, and I doubt you’re going to hear about them anyway, but the deal is set to become official towards the end of this quarter.

So, what does Motally do? Watch the 15 minute video above recorded at the 2009 Under the Radar Conference, but in short they provide developers of either mobile applications or websites data such as which device their customers are using to access content, what operator is the customer on, how long have they spent on the site, what links are they clicking, and so on and so forth. They’ve got two major customers that I’m sure our American readers are familiar with: Fandango and Yelp. And they also do the analytics for a popular service you may have heard of called Twitter.

If you consider that Nokia bought the Bostan based mobile advertising firm Enpocket roughly 3 years ago, then this purchase looks abysmally late. It’s also a testament of Nokia’s reluctance to build anything in house, instead preferring to buy out small companies in order to acquire talent that will leave shortly after running into the wall of trying to communicate with their manager’s manager’s manager via an email that contains a 75 MB PowerPoint attachment.

As a developer Motally saves you from having to build your own backend to handle analytics, but what’s to stop you from using Google’s solutions or anyone else’s for that matter? Nothing. Exactly. Maybe Nokia picked these guys up because they want hard core data on their customers, but are too concerned about asking the people building their services to also build tracking code because said developers are too busy creating and recreating versions 2 and 3 and 4 of the yet to become popular Ovi services?

Any other guesses as to the intent of this purchase? It’s 8 people, couldn’t they have just hired them as Nokia employees? Seriously. And the Enpocket folks, didn’t they have their own backend analytics system that could have been deployed across Nokia’s services?

Rumour has it BlackBerry-maker Research In Motion is trying to buy mobile ad company Millenial Media, but negotiations are hitting...