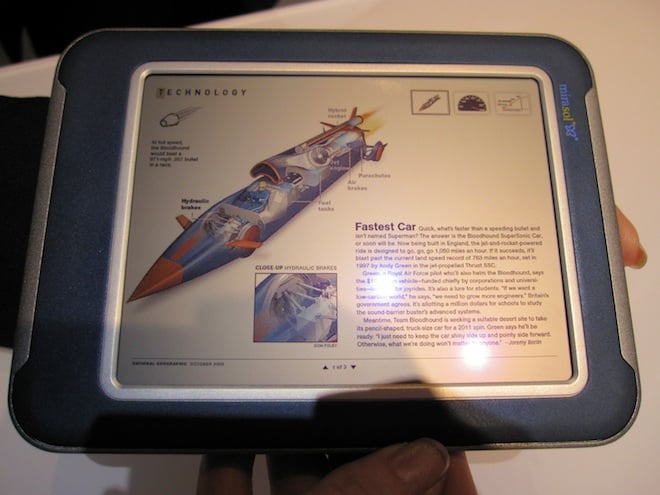 Qualcomm is rumored to be investing upwards of $2 billion into a factory located at the Longtan site in the Central Taiwan Science Park that will mass produce 5.7 inch Mirasol displays beginning as early as 2012 according to sources that have spoken to Digitimes. Mirasol technology, which we’ve covered in the past, shares the attractive properties of both LCD and eInk displays. Power draw is said to be minimal, even less than eInk in some cases, no backlight is required, glare is virtually non existent, color reproduction is possible, as is 30 frame per second video.

Having seen Mirasol displays at numerous trade events, I can attest to the technology’s awesomeness. It just hasn’t hit mainstream yet because there is no one producing said displays in volume. If Qualcomm plays their cards right, then they can offer manufacturers a complete package that offers all three components needed to make an electronic reader: the display, the application processor, and cellular connectivity. Similar to how the Snapdragon system on chip is in many of today’s high end devices, we could potentially see many Mirasol display based electronic readers flood the market in 2012.

Speaking of electronic readers, the new Amazon Kindle, due to hit the market at the end of the month, has a display built by eInk. Amazon Founder Jeff Bezos, in an interview with Charlie Rose, said that he’s seen color Kindle’s in the lab, but that they’re a long ways off from coming to market. Qualcomm can not only give Jeff the ideal display for the next iteration of the Kindle, but also provide him an option to offer a wider portfolio of Kindle devices, as well as give him leverage when negotiating prices for components.

What about smartphones? That’s what I want to know. Shove a Mirasol display inside a device that’s not a multimedia powerhouse, but instead offers customer simplicity, and you can have a hit product that offers both a large screen and insane battery life.

Known for its wide array of feature phones, LG has been struggling to tap into the exploding smartphone market. While it...