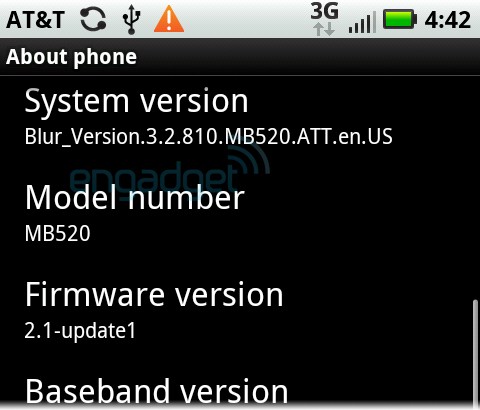 AT&T users take note as the Motorla MB520 Kobe may be one of the next Android handsets to hit Big Blue, potentially taking second place behind the Samsung Captivate. Flying under the radar until now, this previously unknown Motorola handset has been making the rounds of various certification organizations including the WiFi Alliance and the UPnP Forum where it was given the designation “Kobe ATT”.

According to sources from Engadget, the Motorola MB520 is your standard touchscreen candybar-style handset with the following specs:

Not a slouch but not a top performer either, the Motorola Kobe scored a 1036 on Quadrant which places it right below the DROID X and right above the Galaxy S. The MB520 will also include Swype and DLNA, both of which are becoming standard inclusions on Motorola’s Android handsets. As an added bonus, the Motorola Kobe will also include Vlingo which is a nice addition for voice control users on Android 2.1.

If this Motorola handset does indeed hit AT&T as expected, it will fit in nicely somewhere between the Samsung Captivate and the HTC Aria and will give AT&T customers three very capable Android handsets from which to choose.

Hey DROID X owners, we realize that not everyone upgraded to Android 2.2 when it leaked this past week. Despite...