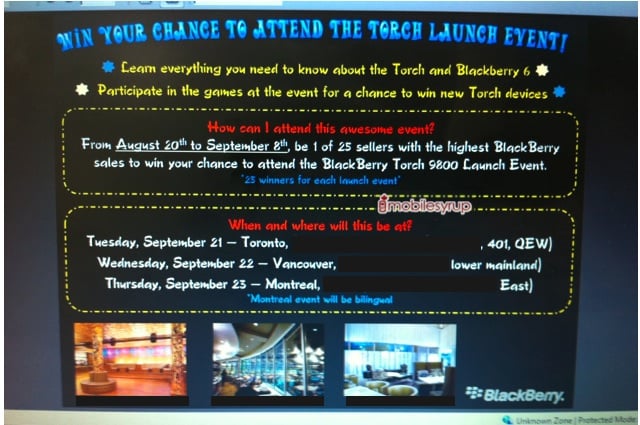 The BlackBerry Torch 9800 has been out on AT&T for a little while now, and north of the border, we’re wondering when Bell, Telus, and Rogers are going to pick it up. Vodafone’s mid-September guideline gave us a good idea, and other hints pointed to a September 16 release on Rogers. Now a series of launch events targeted at sales staff confirms the window, with parties happening from September 21 onwards. Events in Toronto, Vancouver and Montreal will take place on the 21st, 22nd and 23rd respectively, with invites being shot out to the 25 top-selling BlackBerry reps.

The BlackBerry Torch, if you haven’t heard, is RIM’s latest high-end smartphone, being their first to pack a 5 megapixel camera, a portrait sliding form factor, and a brand new operating system. Most of the other specs are pretty stanard: 624 Mhz processor, 512 MB of RAM, Wi-Fi b/g/n, GPS, world roaming 3G, and an HVGA capacitive touchscreen.

If you’re looking for something that’s already available and probably a bit cheaper, the BlackBerry Curve 3G 9300 just came out on Rogers and Telus, and will be offering OS 6 at some point as well. If you’re dead-set on the Torch, however, be sure to check out our review.

Verizon's joint tablet offering with Google may include a multitouch display from N-Trig, a highly-regarded Israeli company known for producing...