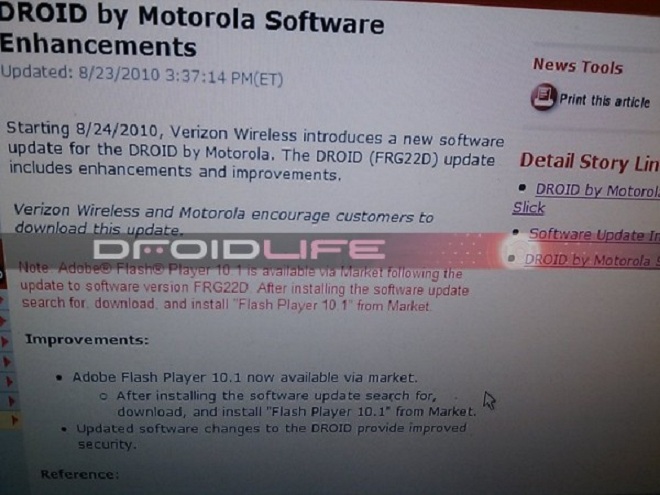 If you’ve been rocking Android 2.2, otherwise known as “Froyo,” on your Motorola Droid but have been wondering where the heck Adobe Flash Player 10.1 is, you’ll be happy to know that Verizon should be pushing out a software update tomorrow (August 24) which will enable your Droid to play nice with Flash content on the web.

This tip comes courtesy of Droid Life. The software update won’t include Flash Player 10.1 itself, but it will allow you to access it in the Android Market. This should also be the official “final” Flash Player 10.1 version that is also available on the Google Nexus One.

Even if this rumor doesn’t come true, Adobe Flash Player 10.1 will be on the Motorola Droid devices relatively soon and then we’ll have a chance to see if Apple CEO Steve Jobs is right about whether or not Flash Player is appropriate on mobile devices. Jobs insists that Adobe’s web technology isn’t right for mobile devices because it is a resource hog and it isn’t optimized for mobile screens. That’s why you won’t find this web technology on Apple iOS devices any time soon.

Of course, having full Adobe Flash support on the Apple iOS devices could create a strong competitor to the App Store and to iTunes itself. Many would still use apps and buy content from Apple but some would find sometimes-free web alternatives which use Adobe’s web technology.

Adobe’s strategy is to get its technology on as many smartphones as possible in order to condition users to expect the full web on their handsets. I don’t think Apple will ever back off its stance for its iOS devices but having Flash could be a key difference-maker.

That’s only if it works well, though.

If you don’t want to wait, check out our detailed guide on how to install Adobe Flash on any Android 2.2 device.

Adobe Flash 10.1 Player is here for the Android platform, but even though it's out of beta only the Nexus...