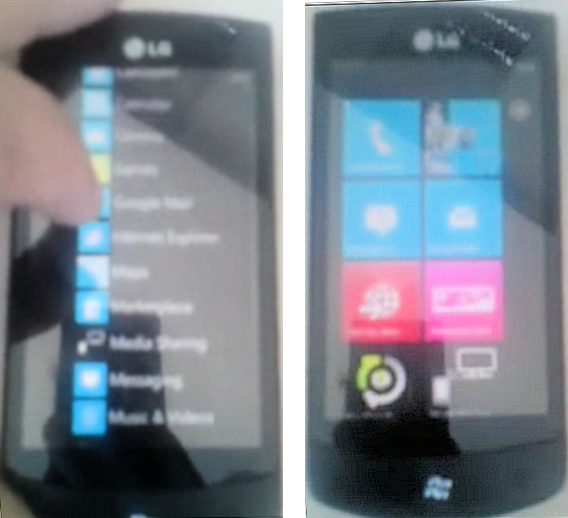 Another Windows Phone 7 offering has reared its ugly head and is available for world to see. Shot through the blurry lens of a video camera is the LG E900, a slate style handset and a presumed launch companion to the recently leaked LG C900.

The E900 lacks the QWERTY keyboard of the C900 and has a super slim form factor. The Windows Phone handset includes a top headphone jack, side camera button, volume rocker, side USB port, and an unusual button combo which features a center silver button flanked on either side by flush, black buttons.

From the blurry video, the handset appears to perform smoothly, has a wide variety of tiles, and looks quite nice in the hand. Sporting a sleeker design than the C900, this model has a minimalistic look to it that may appeal to those who prefer a phone with an unadorned appearance. We only wish the video was less blurry so we could get a clearer, more drool-worthy look at the styling and details of the handset.

With five hardware partners on board, the Windows Phone 7 offerings are shaping up quite nicely for the expected end of the year launch. Spotted or spec-ed, the leaked handsets, thus far, include the Dell Lightening, HTC Schubert/Mozart, HTC Spark, Samsung Cetus i917, LG C900, E900 and an unknown Asus model.

Despite having the same underlying hardware requirements, each model sports a slightly different look and feel. The Qwerty-packing C900 is much different than the thin and shiny Cetus i917. Likewise, the squarish and slightly bulky Schubert/Mozart is much different the sleek E900 With what we have seen thus far, are there any Windows Phone handsets that have caught your eye? Any one that makes you want to ditch your Android handset and embrace the Windows platform? If not, keep waiting as there will be more WP7 beauties for your eyes to behold before launch.