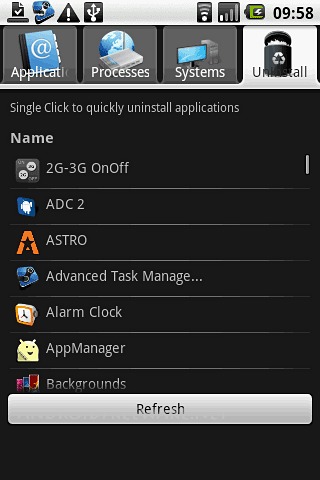 We hear lots of stories about successful application developers for the iPhone and iPad, but we don’t get too many from the Android Market or other platforms. With the rapidly growing global applications market and its astronomical profit projections, Apple certainly can’t be taking all the glory. Proof is in one simple little Android application: Advanced Task Manager.

The Android app does mainly one thing – kill processes and applications running in the background. If any of you have ever experienced an Android device lagging or running low on memory, one little push of a button frees up space and kills applications and processes you designate so that your smartphone runs fine again.

The developer of the app, Arron La, says:

Android is a viable revenue stream.  Although $80,000 total isn’t a lot compared to some of the overnight millionaire stories you hear about on the iPhone App Store (not sure if this is before or after Apple’s cut), you are able to generate good returns. On average, I’m getting around $10,000 a month after all cuts.  Along with my full time job at IBM, I can say I am doing relatively well.

At just 99 cents for the app, $80k certainly isn’t bad over the course of a year and a half. Hopefully this is just the start of bigger and better things for app developers in the Android Market. Let’s face it: the Android Market needs more talented developers and better quality apps. I can open up the application store on my EVO right now and be bombarded with rington and wallpaper apps, and tons of plugins and extensions.

Another thing Google needs to do is get everyone hooked up to paying for apps with PayPal instead of Google Checkout. Even La says the same:

Google Checkout and the Market app are probably the biggest things holding revenues back in Android right now.  The market application glitches often and causes download problems all the time.  I’ve lost count of all emails I’ve gotten over these past two years from users asking why my application won’t download.  I’ve gotten so sick of these that I ignore most of them–I don’t even bother pasting a canned response.

Mobile applications are the key to the future if you’re a developer looking to make a decent living with your craft. From smartphones to tablets and every mobile device in between, the exponential growth in apps and the demand for them don’t show any signs of slowing, and neither does the revenue potential.