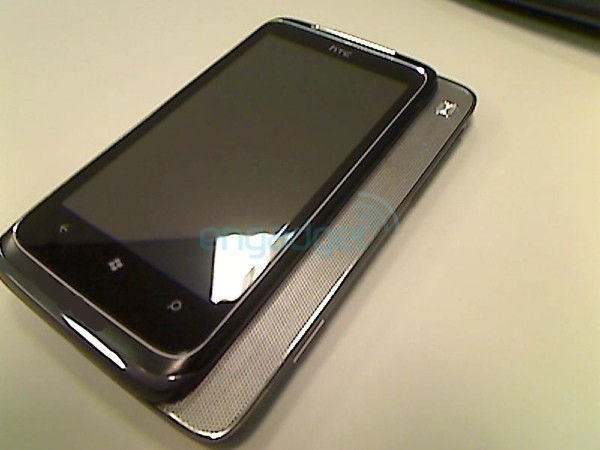 Another day, another Windows Phone 7 handset spotted in the wild and headed for AT&T. Today, we have a silver-trimmed, landscape slider from HTC with the rather bland internal designation of T8788. Looks can be deceiving though as underneath that smooth sliding hinge is not a beautiful HTC keyboard but a speaker for those Zune tunes that will be rocking this handset. Like the EVO 4G and the N900 before it, the T8788 also includes a built-in kickstand for all your media watching needs.

The T8788 has the sleek styling that we have come to expect from HTC handsets and features three capacitive front buttons to meet Microsoft’s hardware reference design. The T8788 has a long, thin, and roundish appearance which is noticeably different from the boxy good looks of the HTC Mozart/Schubert, HTC’s other Windows Phone offering.

Keeping count, we now have a total of  five leaked Windows Phone handsets slated to hit AT&T. This diverse offering includes the Dell Lightening, Samsung Cetus i917, LG C900, LG GW910 and now the HTC T8788. Of the five hardware launch partners, Asus in only the manufacturer not yet represented in this motley crew. While we have spotted a sweet looking Windows Phone offering from the Taiwanese manufacturer, it was not rumored to be hitting AT&T. Fingers crossed that Asus has a trick or two up its sleeve for this October.