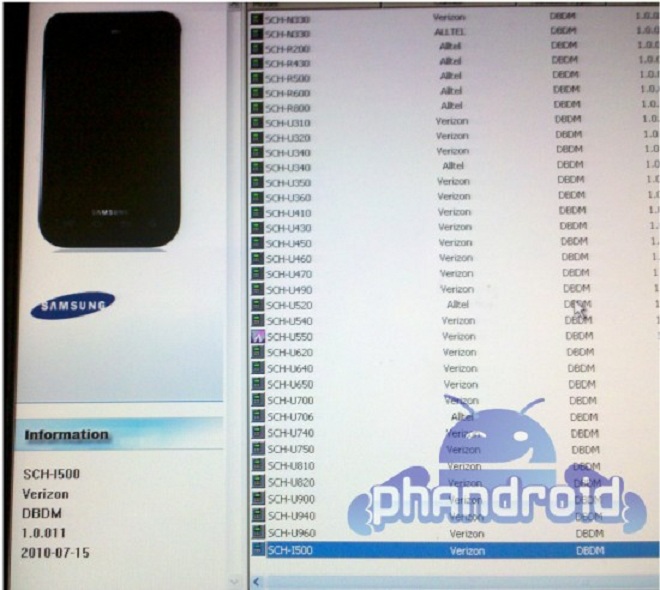 The Samsung Galaxy S release dates are coming in to focus, as the Verizon Fascinate with Android has finally shown up in Big Red’s warehouses.

Samsung had an ambitious plan with its Galaxy S Android lineup, as it secured releases for the top six carriers in the United States. The T-Mobile Vibrant and AT&T Captivate have already been released and the Sprint Epic 4G will be launched at the end of the month. Why yes, we do have full reviews of the Vibrant, Captivate and Epic 4G.

Verizon has been very quiet about when it would release its version of the Galaxy S device and there hasn’t been much leaked besides these spy shots we were able to show off. But the Boy Genius has a really good theory that the Fascinate could launch in early September because the MTV Movie Awards are around that time and it is sponsored by Verizon Wireless and “Samsung Fascinate a Galaxy S phone.” That seems pretty clear to me.

Like the other Galaxy S devices, the Fascinate should have a 4-inch Super AMOLED display, 1 GHz processor, 5-megapixel camera and all the connectivity options you’d expect from a device of this class. The Android handset should get a few slight body modifications to make it stand out but I’m not expecting anything drastic.

Why has it taken Verizon so long to get the Samsung Fascinate out? Well, Big Red has been pretty swamped with high-profile Android releases lately. The Motorola Droid X was released a few weeks ago and it has been a smash hit with its 4.3-inch screen. The Droid 2 was also released recently but it has been plagued with software and signal bugs and this may be why we’re not seeing a ton of these out in the wild.

Look for the Samsung Fascinate to hit for around $200 with a new two-year contract whenever it is released.

Verizon now pushing out Flash 10.1 update to the DROID

It's official! Verizon Wireless has confirmed that it is rolling out the highly anticipated Flash 10.1 update for its popular...