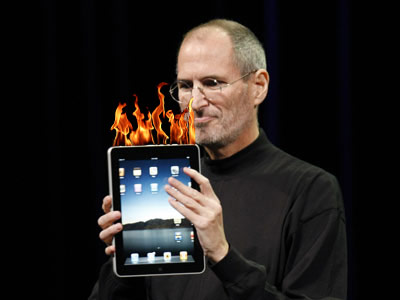 Apple, who can easily be argued as having cornered the tablet computer market with its iPad, has severed ties with SurfaceInk, a company who has been working with Apple for 10 years. SurfaceInk has helped Apple with engineering design, but it has also worked with Apple competitors like Palm and HP. Now that SurfaceInk has developed its own prototype tablet, and continues with its relations with other competitors where it licenses its products and technology, Apple has decided to say arrivederci.

Eric Bauswell, CEO of SurfaceInk, commenter on the matter as reported by the New York Times:

Mr. Bauswell declined to give details of its relationship with Apple, citing client confidentiality agreements. But he said that his company was let go because of “Apple’s growing awareness of our turnkey capabilities,” referring to SurfaceInk’s business of designing products for its clients. “I think they view our capabilities as an opportunity for competitors, “ he said.

Apple is definitely working to keep everything close to the chest, and with SurfaceInk branching out, it’s apparently too difficult to keep a working relationship.

It was that latest part of SurfaceInk’s business, which the company began about five years ago, that apparently unsettled Apple. While SurfaceInk had gotten clients mostly through word of mouth, in June it publicized a prototype 12.1-inch tablet during an electronics trade show.

The device was meant to showcase SurfaceInk’s design capabilities to potential clients, Mr. Bauswell said. He said that Apple viewed those capabilities as a potential competitive threat.

While the iPad pretty much owns the tablet market right now, tablets soon to come from the likes of HP and Samsung may pose a threat to Apple’s baby. It’s also obvious just how guarded Steve Jobs is if the prototype tablet was only meant to show off what SurfaceInk could do, and Jobs viewed it as competition.

In a short email Nozbe informed us their popular task management service now perfectly sings along Google Calendar. As a...