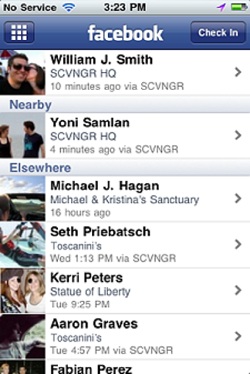 It was only going to be a matter of time before location-based services integrated with the world’s largest social network and SCVGR said it now works with Facebook Places.

If you’re not familiar with SCVNGR, the company offers apps which emphasizes gaming on the whole “check-in” craze. The service is not quite as popular as Foursquare or Gowalla but it did just team up with AT&T to do a location-based check-in promotion for the Samsung Galaxy S phone, the Captivate.

Users will see the SCVNGR app icon in their Facebook streams and this is aimed to show more people the service. The goal, I believe, is to let the world’s largest social network do the heavy lifting on the friend-creation side, while these smaller companies can focus on delivering a stellar location service.

It all sounds well and good for now, but I have the feeling that Facebook Places is going to dominate the location-serving market due to its size and momentum.

Right now, Places is kind of boring and bare bones: you can check in to a location, tag your friends and leave a brief note. That’s relatively primitive compared to the multiple other services which send you notifications when friends are around and let you tag a location with rich media. Those advanced types of features will eventually roll out to Facebook Places though, as the service just launched and is only available via a mobile touch browser or through the Apple iPhone app.

I’m bullish on this new service because I’ve already seen more Places check in among my non-tech friends than I’ve seen from all the third-party services combined. Eventually, it’s just going to be too convenient to use Places instead of the other apps.

Those waiting for Mozilla's mobile browser on Android can now get downloading! Firefox Mobile, currently code-named Fennec, is available for...