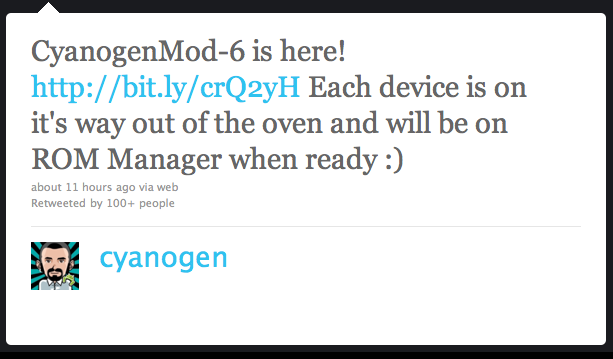 No longer a release candidate, CyanogenMod-6 is now finalized and available for your downloading pleasure. Based upon stock Android 2.2, the is the first stable froyo release for the popular series of custom ROMs. CyanogenMod has gained traction amongst Android enthusiasts as it is free of  bloated carrier and OEM customizations like MOTOBLUR and provides users with the pure Android experience.

Cyanogen was targeting select devices with CyanogenMod-6 and this full release is currently available for the Nexus One, Motorola Droid, HTC Dream, HTC Magic, HTC Evo, HTC Aria, and HTC Slide. Owners rocking other Android devices like the DROID Incredible, HTC Desire, and the HTC Hero CDMA/GSM will have to be content with the current release candidate version until the final ROM is ready.

If you are just starting out with CyanogenMod-6, point your browser to Cyanogen’s forums for additional information on preparing your handset and installing this ROM. For seasoned veterans, you can download the ROM directly from Cyanogen’s website or fire up ROM Manger to get your CM6 on.

Enjoying the beta version of TweetDeck for Android? If so, you will want to point your mobile or desktop browser...