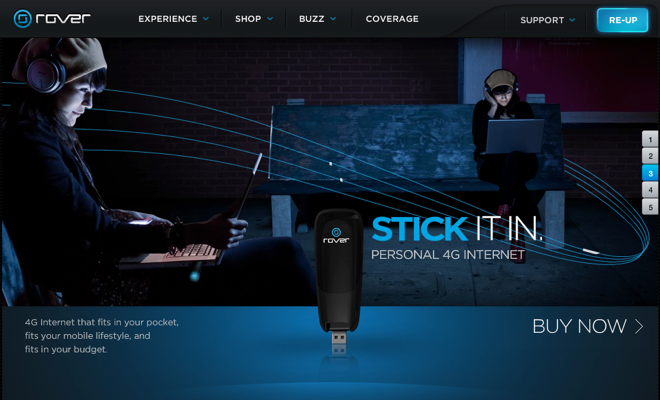 Clearwire’s Monday press event is over and, as expected, the 4G wireless carrier announced its new Rover brand, a spin-off wireless service offering pay-as-you-go 4G mobile broadband service. The Rover service comes in with very affordable tiered pricing plans that include unlimited 4G broadband access for $5/day, $20/week, and $50/month. Being a prepaid service, the plans are available commitment-free.

Clear’s new plans stack up nicely with its competition. Cricket offers a contract-free mobile broadband option that starts at $40 per month for 2.5GB of usage at top speed. Overages do not incur a fee but your connection speeds are throttled. Virgin Mobile went the unlimited route and recently announced an unlimited 3G mobile Broadband2Go service for $40 per month. Though it is $10 more per month than either Virgin Mobile or Cricket, Rover’s new plans offer truly unlimited access on a much faster 4G network.

Rover is launching its service with two new mobile broadband devices- the Rover Puck and the Rover Stick. The Rover Puck is a 4G personal WiFi hotspot that supports up to eight devices at once and boasts of up to four hours of battery life. The Rover Stick is a USB 4G modem that is compatible with Mac and PC and has 32MB of flash memory available to auto-recognize the port of each device with which it has been used. Both devices offer 4G-only connectivity (No 3G) at speeds of 3-Mbps down and 1Mbps up. Priced reasonably, the Rover Puck sports a retail price tag of $149.99, while the Rover Stick will set you back a mere $99.99.

The new Rover  service will be available in all of Clearwire’s 49 4G markets across the US. Starting today, interested parties can sign up online from anywhere in the US and in person at Clear, Best Buy Mobile, and independent wireless stores in Houston and St. Louis. If you are on the fence about this 4G mobile broadband offering, Rover offers two free days of service so you can give it a full work out.

Until the Apple iPhone 4, which has some pretty killer battery life compared to older models, battery usage on the...