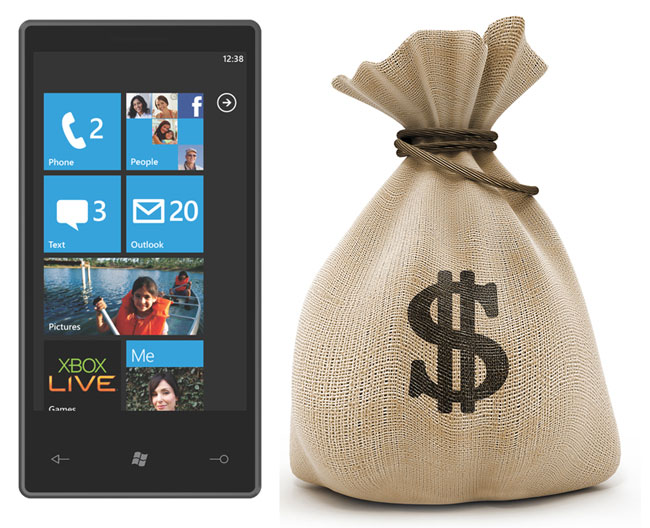 The upcoming Microsoft Windows Phone 7 will still come with a licensing fee of about $15 per unit and that could seem odd in a world where open source alternatives like Android and Symbian can be had for no royalties. A Microsoft employee supposedly contacted AlleyInsider to say that the “free” label with Android and others can wind up costing handset makers more in the long run.

Because there’s no proper attribution to this source, you’ll have to apply your own level of skepticism, but some of these ring true. First of all, when you license Microsoft Windows Phone 7, you’re not at risk for the same IP lawsuits that may come with other platforms. We know that HTC is facing some legal action over some alleged Apple patents in its Android phones, although it is widely speculated that Google is helping HTC fight this.

Microsoft also says that by requiring Windows Phone 7 licensees to use hardware that fits into its chassis requirements, handset makers can spend less customizing each handset for different versions of Android. There had been some speculation that Android 3.0 will only come to devices that meet a minimum set of hardware requirements but that has been partially debunked. I’d still be surprised if the majority of Android devices received Gingerbread though.

Microsoft also argues that Windows Phone 7 comes with automated testing for quality assurance purposes. This is a solid point but companies can go to third-party providers like DeviceAnywhere for this type of service – that’s still an additional cost.

The company also makes another few arguments for Windows Phone 7 which don’t quite hold as much water, as it says that the “essential” mobile services like Office are already baked in and don’t cost additional license fees. It also says handset makers won’t have to invest in custom user interfaces like MotoBlur because of the Windows Phone 7 UI.

Some of these are salient points but others aren’t so much – I do know that nothing’s really free in this world. What do you guys and gals think?

Our friends in the great, white north will be happy to know that Microsoft Windows Phone 7 will be launching...