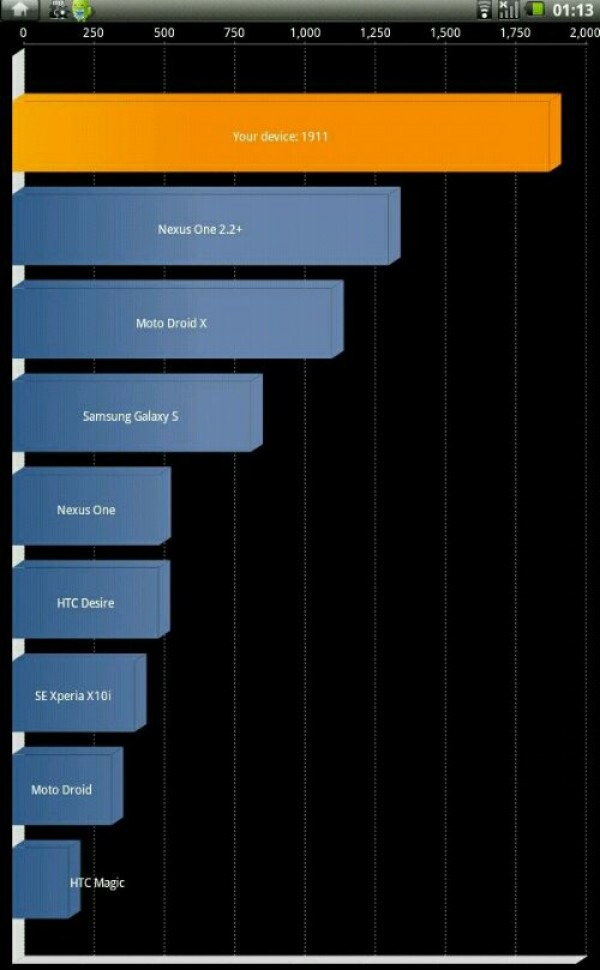 The NVIDA Tegra 2 dual-core chip will find its way into many upcoming Android phones and tablets later this year, and for good reason. The Tegra2 offers a true dual-core processor, giving any device with the Tegra 2 system-on-chip CPU running under the hood the kind of experience that is probably best described as “blazing fast”. As you can see from a recent benchmark using Quadrant, the NVIDIA Tegra 2 will give even the mightiest of currently available high-end Android smartphones reason to worry.

We know Quadrant is not the most reliable benchmarking application out there, but it’s still many people’s go-to Android benchmarking app, and for the most part, it performs well. Sure, there are Quadrant scores out there hitting almost 3000 with by using a tweaked kernel or other optimizations to trick Quadrant into giving a higher score, but for unaltered handsets, the benchmark tool still gives us a good indicator or raw processing power. The benchmark above has been untouched, and shows the true power of the Tegra 2 platform and its dual-core processor.

The benchmark was taken using the Toshiba AC100, an Android-based netbook with the Tegra2 in tow. Best of all, the AC100 is only running Android 2.1, and does not have any of the speed benefits, such as the JIT (Just In Time) compiler, and the JavaScript V8 engine for web browsing. We don’t know about you, but we just can’t wait until we see the Quadrant score after the netbook gets it’s Froyo (Android 2.2) on. If you thought the Ac100’1 benchmark score is impressive compared to a Nexus One with Android 2.2 Froyo installed, just wait until we see a Tegra 2 benchmark using Android 2.2!

Here’s what the person who gave the AC100 the benchmark had to say:

SunSpider result of 9300 and Pi being calculated in 2081ms which is 3x faster than the average score on the BenchmarkPi application. It can handle a 1080p H.264 file at 13mbps and plays Raging Thunder 2 on the 1024×600 screen like a demon! For a smart platform, Tegra2 is taking it to the next level.

The Tegra 2 will indeed be taking Android to the next level, or any platform with the CPU running on it. LG is dedicated to throwing the Tegra2 into their upcoming smartphones, and a slew of tablets should ship with it as well. So now the question is if you’re willing to wait until possibly the end of the year before you have a decent selection of Tegra 2-based devices to choose from.

Some shots of a new Android phone from LG have bubbled up, along with a handful of specs. Running Android...