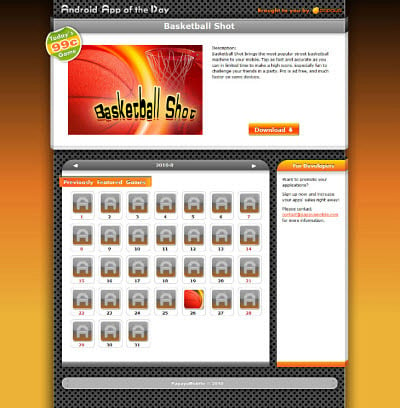 PapayaMobile is looking to get Android developers noticed. If you’re a developer, or even just a casual smartphone user, being overwhelmed with tens of thousands of apps makes it difficult to get attention or to pick out some decent apps. PapayaMobile has now launched Android App of the Day which–you guessed it–features new apps every single day. The app marketing program announces new apps that are either free or discounted at 99 cents for that day only.

“We did this because we found that it was hard to get our own apps discovered,” said PapayaMobile chief executive Si Shen in an interview.

PapayaMobile started as an app maker and it has since created a platform that can be used to socialize games. That is, it adds social features such as sharing, leaderboards or challenges so that an app can be spread from one friend to another more easily. The company competes with rivals such as Aurora Feint and Scoreloop.

Getting notice or attention, or even discovered, in app stores these days can be tough, especially if you’re a developer not working in a bigger firm with money to back advertising. The idea with PapayaMobile Android App of the Day should help developers get more exposure, and in turn maybe users will start getting exposed to apps that they like but would have otherwise missed.

However, if you think that dealing in volume means quality will go down, PapayaMobile says that the focus is actually on decent quality apps.

VentureBeat also says of PapayaMobile, “Apps can also be offered for free if they are downloaded from a web site and not directly from the Android Market. Developers can submit their apps for free if they enroll in the program by Sept. 12.” Not a bad deal and definitely good news for Android users who are on the constant look out for high quality apps for less or free.