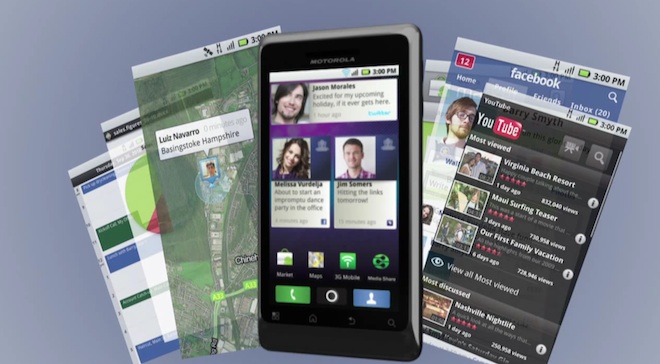 The Motorola Droid, the device that launched Verizon’s highly successful counterattack to Apple and AT&T’s plans for world domination, went on sale across Europe and Asia as the Milestone. It thus doesn’t take a genius to guess what the Droid 2 is going to be called then when it’s on store shelves in the UK, France, and other places where imperial units are seen as confusing.

Above is the video for the Milestone 2, due to launch by the end of the year, and it offers exactly what Verizon’s Droid 2 has, except it supports the GSM networks that connect 80% of the world. You’re looking at a 1 GHz Cortex A8 processor from Texas Instruments, 512 MB of RAM, 3.7 inch screen that has a higher resolution (480 x 854) than most other Android devices, 5 megapixel camera that does 720 x 480 resolution video recording, Bluetooth 2.1, 802.11n WiFi, GPS, all running on Google’s latest version of Android: 2.2, code name FroYo.

Price isn’t known, and depending on which country your in, and how they tax mobile phones and/or GPS units, then you’re looking at anywhere from 400 EUR all the way up to 600 EUR. Do I recommend the Milestone 2? Well I never used Motorla’s custom Android user interface layer known as MOTOBLUR, and Chris Ziegler, who I count as one of my friends, wrote his review of the Droid 2 for Engadget and says that the interface can sometimes be laggy.

I’m sticking to my guns with my earlier recommendation to pick up the Google Nexus One. If you can find it, then get it. You’re not going to regret it. Terribly confused as to why Google stopped selling it, and I’m hoping they come to their senses and put it out on the market again, or better yet release a successor that yet again raises the bar for what a smartphone can do.

Update: Motorola just announced the Milestone 2, and unlike what I’ve written above, it comes with 720p video recording, not 720 x 480 vide recording. Here’s the official product page. No word on pricing, and the release date is “Europe in Q4”.

Motorola: After we split in 2, we’re giving the handset unit $3.5 billion [That’s a lot of tacos]

Motorla, the once giant American company that pioneered the invention of the mobile phone, has gone through a battering over...