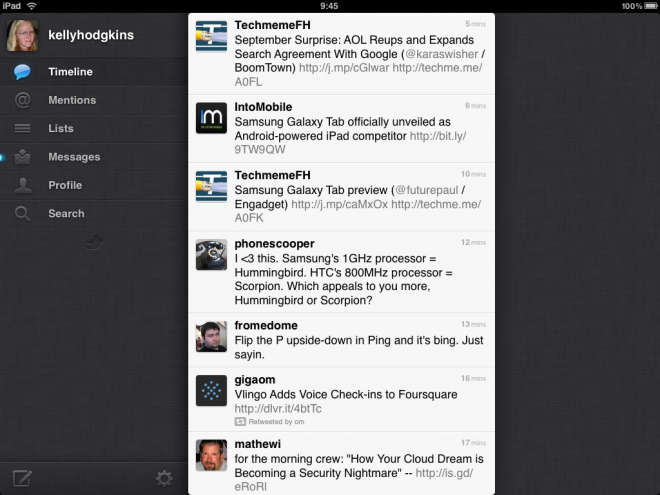 The official Twitter app for iOS has been updated and now runs lean and mean on the Apple iPad. The new Twitter for iPad is optimized for the larger screen of Apple’s tablet device and includes a multi-paned UI that displays a navigation menu and your twitter feed side-by-side. While this layout is utilitarian, it does not expand to fill the whole display of the device and you are left looking at a glaring black border around the main contents of the application. 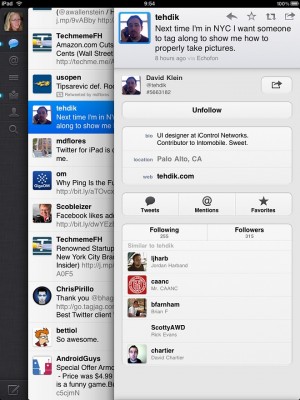 One cool feature that distinguishes the tablet version of the app from the iPhone version is the multi-paned UI that overlays content related to a tweet, including images, web pages, profile information, and more. Clicking on a tweet that contains a link will reveal the contents of the link whether it be a yFrog image or a blog post. Likewise, clicking on a tweet from an individual will reveal the user’s profile information, recent tweets, mentions, favorites, and a button to follow or unfollow the individual.

The interface is intuitive and you can use a swiping gesture to show or hide these layered panes. Twitter for iPad also integrates with all the common services that we have grown to love including yFrog, TwitPic, TwitVid, Posterous, Instapaper, and more.

While the iPad version includes all the standard fare including timeline, mentions, lists, messages, profile, and search, you are limited in what you can edit on the device. The most glaring omission is the ability to add or remove individuals from your lists. You can view your lists but you can not modify them from the tablet’s interface. Unlike its iPhone counterpart which supports notifications, the official Twitter for iPad currently lacks support for notifications, including the highly coveted push notification.

Overall, the Twitter for iPad app is a modest offering that will appeal to some. With its free price tag, it is a no-brainer to download and try, but don’t expect it to replace Echofon, especially for those hard-core users amongst us.

Foursquare and Vlingo are teaming up to battle bigger competitors and the companies are integrating voice controls to do things...