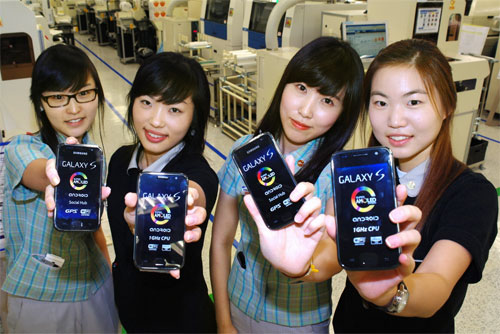 It’s not just the U.S. where Samsung is selling its wildly popular Galaxy S smartphone like hot cupcakes on a cold winter day. In its own backyard they are doing the same as you may’ve read from our previous posts.

As a matter of fact, the Android-powered device is the single fastest selling phone in the South Korean market, ever. Period. The only other Samsung handset that comes close is Yu-Na Haptic, which was bought by half a million people in 80 days.

Of course, this isn’t the “regular” Galaxy S phone we’re talking about, but the one fine-tuned for the high-end mobile market of South Korea – model number SHW-M110S. You guessed that correctly, it rocks T-DMB allowing Koreans on the move to stay tuned to their TV programming. Rest of the specs, however, remain unchanged and include that beautiful 4-inch Super AMOLED WVGA capacitive touchscreen, HSPA and WiFi(n) connectivity, 5-megapixel camera with 720p HD video recording capability, Bluetooth 3.0, GPS and a whole lot more…

Samsung has just sent out invites to a September 16 event in which its new Media Hub and a new...