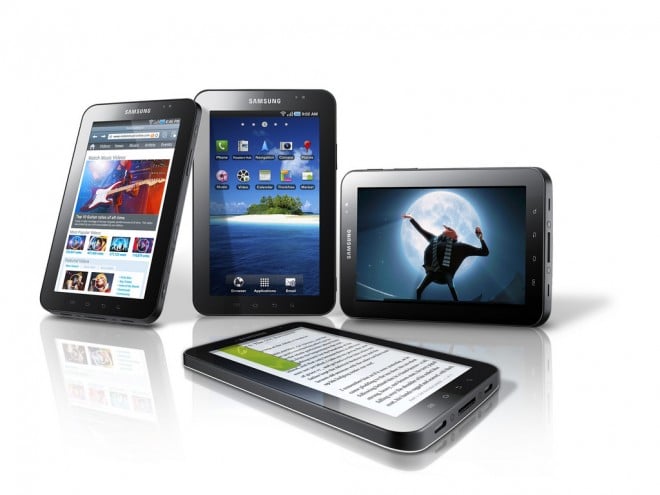 After a brief tease last week, Samsung has made its Galaxy Tab official. The teaser video from last week hinted at most of the details on this tablet, but it is exciting to see the nitty gritty details fleshed out. Other than a Tegra 2 processor, this hot, new Android 2.2 tablet is chock full of the best hardware the Korean manufacturer has to offer including:

While I knocked Samsung for its choice of a single-core processor over the dual-core Tegra 2, the Korean manufacturer potentially had a marketing-driven reason to make this choice. Samsung most likely opted for the 1GHz,processor present in its Galaxy S handset lineup to get this tablet out the door before its competition. For a brief time, Samsung has the jump on their Tegra 2 powered rivals, like the Toshiba Folio 100 tablet, which are not expected to arrive until later this year.

By choosing an early delivery date over processing power, Samsung has garnered the attention of the technology world for the immediate future. It is the shining star in the Android tablet world right now and makes its only competitor, the Android 1.6-powered Dell Streak, look like last year’s leftovers. I know that I am excited about the Galaxy Tab and have my fingers crossed that it lands at an American carrier (cough, cough, Verizon Wireless) sometime soon.

If you have not gotten your fill of the Samsung Galaxy Tab, head on over to our hands-on preview where have some close-up shots and a short video for your viewing pleasure.

Thanks to Gizmodo, who showed the world that you can kill the reception of an iPhone 4 by holding it...