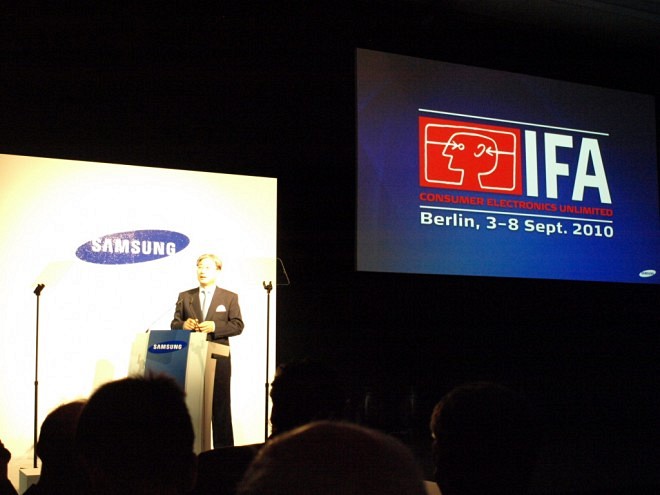 Samsung has just sent out invites to a September 16 event in which its new Media Hub and a new Android device will be discussed, and possibly launched. Could the new Android device just be the Galaxy S variant for Verizon – the Fascinate? Or will it be the Samsung Galaxy Tab that we just saw at IFA?

Media Hub, Samsung’s video stores for movies and videos, shouldn’t come as too much of a surprise to anyone. We caught a very short glimpse of it when Sprint compared the Epic 4G with the HTC EVO 4G, telling us that we’d be able to rent or buy TV shows and movies though Media Hub. The videos will also be viewable before they’re finished downloading if you get that impatient.

According to PC Mag:

We got a few minutes of hands-on time with Media Hub when we did our review of the Epic 4G. The store lets phone owners rent or buy a library of TV shows and movies for pretty industry-standard prices: rentals around $3/day, and movie purchases in the $12-20 range.

According to Samsung, the store will include progressive downloading so users can start viewing video before a file is fully downloaded. Files will be custom-encoded to look great on a range of devices, the company said.

The pricing for the rentals and purchases don’t seem too bad, especially if you’re a huge content consumer. And with the ample SD card storage that the handsets, like the Fascinate, are shipping with, there should be plenty of room for all your media.

Samsung is really hanging on to its firm place in the U.S. smartphone market and Media Hub is a nice start for the manufacturer. It really isn’t just about smartphones anymore as much as it is the apps and services that they can provide, as Apple has so boastfully announced during its event yesterday.

iStethoscope app can monitor your heartbeat!

You know there are tons of sensors under the iPhone's hood (and under the hood of many of today's smartphones...