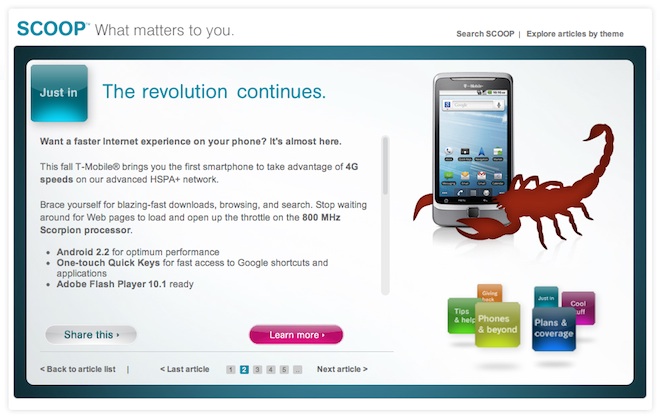 T-Mobile’s insider newsletter, aptly called “SCOOP“, has revealed some details on the yet to be announced HTC G2, namely that the processor inside is clocked at 800 MHz, the operating system it runs is Android 2.2, and that the peak theoretical network speed it’ll offer customers is 14.4 Mbps.

But doesn’t T-Mobile have a 21 Mbps HSPA+ network? You may be asking yourself that question, I know I am. Why couldn’t they get those extra ~ 6 megabits without increasing the cost too much? AT&T has said that they’re going to upgrade their network to 14.4 Mbps HSPA+ and then go full blown LTE next year. T-Mobile on the other hand has no 4G strategy at the moment, they may partner with either Sprint or LightSquared, but they’ve said that they’re doubling their HSPA+ performance to 42 Mbps in 2011.

That’s the new information. The old stuff, in case you’re thinking about buying this thing, is: 3.7 inch screen, QWERTY keyboard, 5 megapixel camera, going to cost $200 on a 2 year contract or $500 up front, it’ll support Adobe’s Flash 10.1, and … that’s it. The only missing piece right now is the launch date, and judging by the increasing frequency of the new tips we’re getting about the G2, we’d be shocked if it wasn’t going to be announced and shipping within the next 30 days.

Should you buy it? If you really need Android with a QWERTY then get the Motorola Droid 2. You’ll be on Verizon, the best network in the USA, you may not have the same awesome download speeds, but you’ll have 3G in more places, whereas T-Mobile is still rolling out HSPA+, and you’ll also have a faster device in terms of raw computing horsepower. I’m let down. Here I was thinking this would take full advantage of T-Mobiles 21 Mbps network, and that it would have Qualcomm’s next generation dual core Snapdragon processor.

Going to have to wait until 2011 to see a device like that it seems.

After a brief tease last week, Samsung has made its Galaxy Tab official. The teaser video from last week hinted...