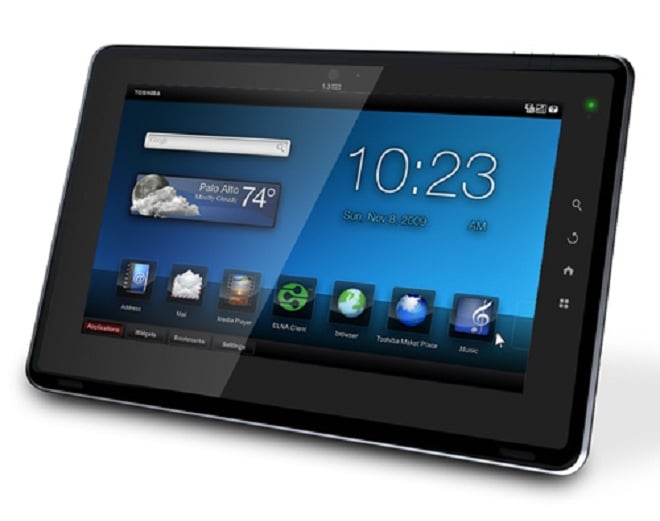 Toshiba officially introduced its Folio 100 tablet at the IFA show in Berlin and the Android tablet is going straight after the Apple iPad and the flood of Android tablets that should soon hit the market.

The Toshiba Folio 100 will have a 10.1-inch capacitive multitouch display with a 1024 x 600 resolution. It will be powered by an Nvidia Tegra 2 processor and it will have all the goodies you’d want including WiFi (802.11n too), Bluetooth, 3G capabilities, a 1.3-megapixel webcam, support for DLNA media sharing, a much-appreciated USB slot and SD/MMC card reader.

The Toshiba tablet will be powered by Android 2.2, which means that it will be capable of using Adobe Flash. This is a key differentiator between this and the Apple iPad.

Speaking of the Apple iPad, the Toshiba Folio 100 will be going directly at this “magical” device. In an interview with Bloomberg, Toshiba said is is “reasonable” to expect to gain up to 20 percent of this growing market by the end of 2011. Laptops and netbooks will continue to outsell tablets over the next few years but this market could grow at an exponential rate.

The Apple iPad has reinvigorated this market, as Microsoft had tried to make tablets mainstream a decade ago. Apple has sold more than 3 million of its iPads and we’re seeing multiple manufacturers jump into this space.

The Samsung Galaxy Tab looks like a winner, as it sports a 7-inch screen, Android 2.2, a gyroscope and all the connectivity one would need. It also features customized apps to take advantage of the larger screen.

Pricing may be an important issue, as the baseline Apple iPad can be had for $499. The Folio 100 will launch next month for about $500 in Europe but it’s unclear if this device will come to the United States.

I believe that tablets are leisure computing devices right now and it’s going to be tough to beat Apple in that space unless you offer a similar experience at a lower price.