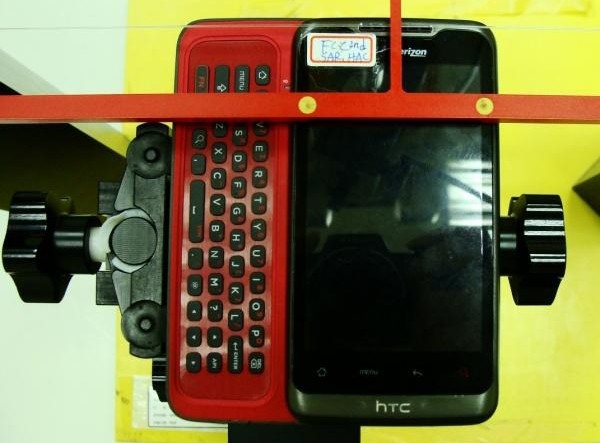 An Android-powered QWERTY slider from HTC was uncovered in the myriad of test results that emerge from the FCC. Designated the PD42100, the handset prominently features a Verizon logo and Android-specific touch sensitive front buttons. According to the test results, the handset is a world phone with dual-mode CDMA(2000)/GSM(850), EV-DO Rev. A, Bluetooth, and 2.4GHz 802.11 b/g/n WiFi.

Spotted in a previous leak, the side slider has a distinctive red keyboard that is reminiscent of the red interior included on the DROID Incredible. The rumored specs place this Android handset at the high-end of the mobile phone spectrum and include a 1.2GHz processor and 4-inch display.

While we have seen two separate leaks uncover Verizon’s upcoming 2010 device roadmap, a handset with this configuration or internal name has not been identified. Its closest match is a brief and vague reference to a global HTC Android handset that is slated to launch by the end of the year. Assuming this roadmap is correct, we can expect to see more of this handset in the upcoming weeks.

[Via FCC and Engadget]